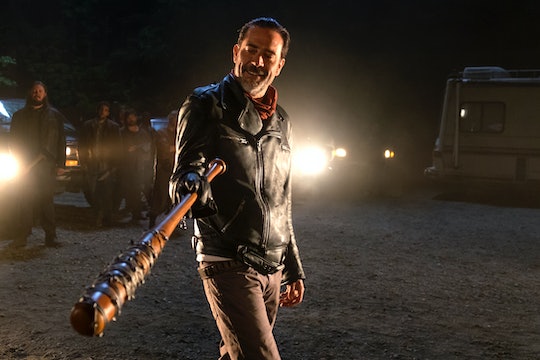 Is Negan Still Alive In 'The Walking Dead' Comics? Season 7 Has A Lot Of Story To Tell

Negan has made a huge impact (no pun intended) for a character who has barely appeared on The Walking Dead. In the grand scheme of things, his screen time has been relatively small; aside from his introduction at the very end of Season 6, he's only appeared in one full episode so far. Despite that, the ripple effects of his presence have been felt both on and off-screen. Negan is all anyone can talk about because he might be the biggest threat the characters on the show have ever faced. But can the comics reveal anything about Negan's fate? Is Negan still alive in The Walking Dead comics? Surprisingly, the answer is yes. And to make the matter even more shocking, it's due to the fact that Rick allowed him to survive.

Negan raises a lot of questions for Rick about what kind of leader he wants to be. In Season 6, in an attempt to deal with the rising tide of Saviors, Rick tried to head Negan off at the pass by slaughtering a safe house full of his followers while they slept. And even though Rick has gotten fairly used to taking out potential threats (one or two cannibals will do that to you), that move was still on the extreme side for him. The fight to build instead of destroy is one of the series' biggest themes, and it's delineated by Rick's conflict with Negan. The jump to extreme violence is straight from the Negan playbook, so the fact that Rick allows Negan to live in the comics shows that he's choosing to be a different kind of leader. Even if that means Negan could pose a threat in the future.

The "All Out War" between the Saviors, the Alexandrians, the Hilltop community, and the Kingdom is a big storyline in the comics. Battles between different survivor groups have played out in The Walking Dead before, but the fight against Negan is by far one of the biggest. During that final showdown, Rick and Negan each get in some serious strikes against each other: Rick ends up with a broken leg, and Negan gets his throat slashed. He survives and is locked up in a basement in Alexandria — a punishment that is more humane than killing him, but still intended to make Negan suffer. Death is a quick out, but watching the world go on around you while you rot in a cell is a different matter. It makes the powerful Negan feel powerless.

It works for a while, but not forever. Negan is kept in his cell for two years while Alexandria finally begins to flourish. While locked up, Negan has some heart-to-hearts with Carl through the bars, and also offers some (potentially ill-advised) advice to Rick about a burgeoning threat to the community, a new group called the Whisperers. Negan eventually gets free when a Hilltop resident named Brandon Rose lets him out; Brandon has a grudge against Rick, and wants Negan's help in pitting Rick and the Whisperers against each other. It appears that Negan's time in jail eventually gives him a strange affinity for Rick, however, because this leads him to kill Brandon, infiltrate the Whisperers, and kill their leader. It's sort of like when your cat kills a bird and leaves it somewhere for you to find.

Negan has survived this long in the comics, which means he may be on the show for seasons to come. And while it's hard to imagine that Negan could ever find redemption for everything he's done, he will obviously still have a lot of significance in the story going forward. That is, unless the show decides to go in a different direction, of course.