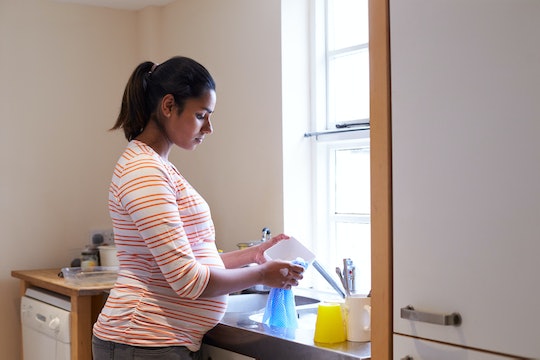 Is Nesting Real? There's Some Science Behind Your Need To Clean

There certainly is no shortage of old wive's tales and stereotypes when it comes to pregnancy. And although many are based solely on superstitions, some maternal symptoms actually have scientific evidence to back up their claim. From forgetfulness to mood swings, pregnancy have been proven to cause odd behavior in women. But what about the sudden urge to clean and prepare your home? Is nesting real or is it just a term used to explain random happenings prior to giving birth?

You've probably heard stories about a pregnant woman being struck with the overwhelming need to organize their nursery at the ungodly hour of 3 a.m. on a weeknight. Is an anxious mind or something else the motivating factor behind these industrious types of actions? Logically, it makes sense that a responsible person would want to do whatever they could to be as ready as possible for bringing a new life into this world. Yet, it can be difficult to rationalize exactly why you're on your hands and knees, using a Q-tip to get dust out of the crevices in your baseboards (which I may or may not have done).

If you haven't already guessed by now, there are some classic signs you're nesting. Cleaning, for instance, is a major one, but so is wanting to stay home, rearranging furniture, or experiencing more intense emotions. The question remains, however, as to whether or not these situations are random or real. According to the American Pregnancy Association, though not all pregnant women may go through it, nesting is real. To add further validity to this experience, the experts at What To Expect When You're Expecting noted that animals also have a nesting phase as well and "the nesting instinct in humans can be as powerful as it is for our animal friends."

Though nesting is, indeed, real, you should still take safety precautions during your pregnancy. According to Parents, it's advisable to avoid cleaning chemicals, heavy lifting, and overexertion as an expectant parent. Besides, it gives you a nice excuse to make all those Pinterest ideas a reality and fill your friends' Instagram feed with adorable pictures.