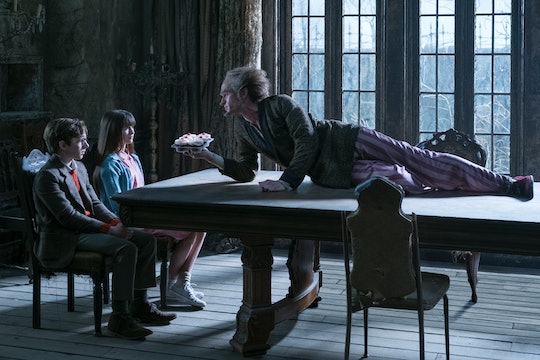 Is Netflix's 'A Series Of Unfortunate Events' Based On The Books? The Trailer Suggests So

The book series A Series of Unfortunate Events is without a doubt a modern classic. It's one of the most widely read children's series ever, with over 50 million copies sold in over 40 different languages by the time the story wrapped with the 13 book about a decade ago. Despite its popularity, adapting the books for the screen hasn't run all that smoothly – until now, anyway. The latest incarnation dropped the first full-length trailer today. With the first in-depth look at the new show, we're wondering now whether Netflix's A Series of Unfortunate Events is based on the books directly – and which books, exactly, its first season will cover.

While it was pretty clear all along that the show was, of course, based on the story told by the beloved series, before the trailer premiered, it remained to be seen how closely and faithfully the Netflix seres would adapt the source material. Earlier, shorter teasers had focused on building up the atmospheric elements of the show – which is clearly very faithful to the doom-and-gloomy feel of the source material – but had been light on specific plot details. Viewers could easily have thought that the show might just take the books' premise as a jumping off point, aging up the material for a more mature audience. But the new full trailer suggests that the show will be closely based on the books.

In the nearly two-and-half minute long trailer, there are multiple references to specific events and characters from the book series. Uncle Monty (of the second book) gets a mention, Aunt Josephine (of the third book) shows up, and The Incomplete History of Secret Organizations even makes an appearance, pointing towards the larger adventure that the Baudelaire orphans are set to embark upon, probably in the second season – assuming the show is picked up.

The Count Olaf of the book series is easily best known for his numerous disguises and diabolical plots to defraud the Baudelaire kids of their fortune. Several of Olaf's specific "alter egos" make their appearance in the trailer as well: we see Stephano, Captain Sham, and Shirley the receptionist, Olaf disguises that we knew were on the horizon, thanks to the behind-the-scenes photos Neil Patrick Harris tweeted out leading up to the trailer's premiere.

In a September appearance on Live! With Kelly, Harris divulged specific details about the how the show would take shape given the 13 book series, explaining that the first four books would be two episodes each, comprising the eight-episode first season of the show. Referencing the 2004 Unfortunate Events adaptation starring Jim Carrey in the role of Olaf, Harris said,

They truncated all of the books into a two-hour movie. And there’s 13 books in the series. So [the Netflix show's take on it] is more spread out. Each book is going to be two episodes. We did the first four books, the first eight episodes of the show."

Despite seeming relatively faithful to the source material and appearing to present the events in the same order they unfold in the original books, Harris explained that, tonally, the show is "super dark" and that Netflix's version was "a much darker take on the material than has been seen before."

It sounds like the first season of A Series of Unfortunate Events is going to be one to watch as soon as all eight episodes drop on January 13.