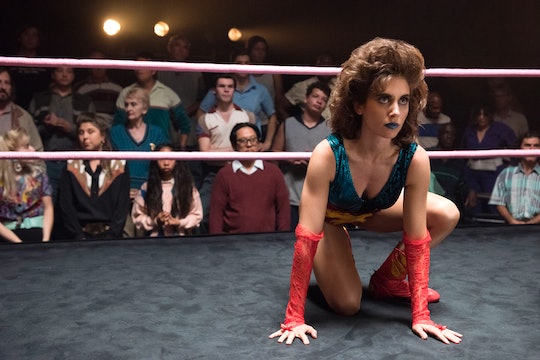 Is Netflix's 'GLOW' Based On A True Story?

Netflix's upcoming series GLOW follows Ruth Wilder, played by Alison Brie, as she tries to make it as an actress in Los Angeles in the 1980s. After a frustrating lack of success due in part to Ruth not being able to find any decent, strong roles for women, she ends up at an audition that changes everything for her. She gets pulled into the world of female professional wrestling, which might be just the break she was looking for. Female wrestling is definitely a thing, but how much of the show is inspired by real events? Is Netflix's GLOW based on a true story?

GLOW, which stands for Gorgeous Ladies of Wrestling, is indeed based on a true story, though not every detail is factual. It was a TV show that ran for four seasons in the late '80s and integrated comedy and skits into its format in addition to the wrestling matches. The women involved were actresses, models, and stuntwomen portraying colorful (but sometimes very stereotypical) characters on screen. It was campy and lighthearted and very '80s. All of that seems to be represented in the trailer for the Netflix show, but the characters don't necessarily reflect the real people involved in Gorgeous Ladies of Wrestling (or at least don't share their names). Netflix's Glow appears to be telling a fictionalized version of a real story.

The original GLOW was created by Matt Cimber and David McLane, with help from Jackie Stallone (Sylvester Stallone's mom). Mama Stallone had partially inspired the concept thanks to her women-only gym, Barbarella's, and she stayed on as a promoter in the series. The women wrestlers were split into two groups, Good Girls and Bad Girls (the only two available categories for women, I guess), with Stallone taking on one team and Kitty Burke promoting the other. The rivalry between the two groups fueled much of the content and matches for the show.

As funny and silly as GLOW could be, it wasn't without its problems. There are reports that the women were not all as well treated as they could have been, with Cimber tearing them down verbally and trainers pushing them to their limits. The women were also forced to relocate to Las Vegas for filming and live in a communal house, which not everyone was thrilled by. Then there were the racially stereotypical characters some of them had to play, like Palestina the Middle Eastern terrorist and voodoo practitioner Big Bad Momma.

The trailer for Netflix's GLOW paints the experience as a very empowering one, so it's not clear yet how much of the behind-the-scenes problems will make their way into the series (though their are hints that not everything will be picture perfect). Considering the show was produced by Jenji Kohan and Tara Herrmann from Orange is the New Black and was co-created by Liz Flahive (Homeland) and Carly Mensch (also from Orange is the New Black), it'll probably be in the right hands when it comes to conveying comedy and drama in equal measure.

And perhaps the veil of fiction will allow the show to tackle the less savory aspects of the original series with the perspective of distance.