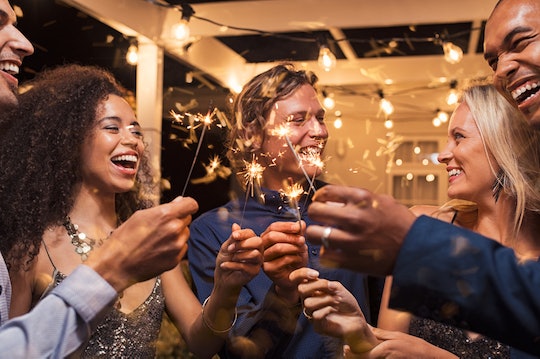 Not Everyone Gets New Year's Eve Off, So Make Sure You Run It By Your Boss ASAP

When I started my first job out of college, I figured there was a mistake on the holiday calendar. The office was open on December 31, New Year's Eve. That's a joke, right? How on Earth was I supposed to sit at my desk all day, hungover from Christmas cheer and not-so-patiently waiting to break out the sequins and champagne? Turns out, entering the real world meant confronting all sorts of important, life-changing questions like: Wait, is New Year's Eve a holiday? As it turns out, the answer is... sort of. Mostly unofficially.

If you ask the U.S. government, apparently you're expected to spend your last day of the calendar year being, you know, a productive member of society. While New Year's Day is an official federal holiday, New Year's Eve is not. That means that all federal government offices are open on December 31 (which is great news for anyone still waiting for their NYE outfit in the mail).

However, some states — Kentucky, Michigan, and Wisconsin — do observe NYE as a holiday, according to TimeAndDate.com, which means many of their residents get to take off work and start their celebrations early.

However, just because NYE isn't an *official* holiday in many places doesn't mean you'll definitely be forced to attend work or school. In fact, according to TimeAndDate.com, "most schools and other educational institutions throughout the United States are closed." If your boss is especially generous, your work might also be closed as well (or, at the very least, you'll probably close early). That way, everyone gets home in plenty of time to get dolled up for your New Year's Eve celebrations or get safely inside in time to avoid them all. I've been on both sides.

Speaking of getting dolled up, many restaurants, bars, clubs, theaters, and other entertainment venues run special programs or events on NYE, as you probably know. Make sure you make plans, buy tickets, and do whatever you need to do in plenty of time. Coming from experience, it's a huge bummer when you plan to buy a ticket to an open bar event at the door, only to find out it's completely sold out — unless you enjoy watching your friends have fun through a window, in the cold.

You can pretty much assume most places are closed on the big federal holidays (Christmas, New Year's Day, etc), but NYE is a bit trickier. So if you're planning on running errands or going on an outing, I'd highly recommend calling ahead and just making sure you're aware of your destination's business hours. Many stores and restaurants will have shortened or limited hours, or not even be open at all on his "non-holiday" holiday. There is no way I'm braving New Year's Eve traffic to get somewhere unless I'm 100 percent positive it's open. On that note, make sure you're aware of public transit services if that's your preferred mode of transportation, as many lines run on reduced hours on that day.

As 24-year-old me learned the hard way that NYE shouldn't be an assumed holiday. Much of the world is still business as usual on December 31, or at least for part of it. And don't worry, even if you're working a full day on the last day of the year, the party will inevitably still be going when you finally clock out.