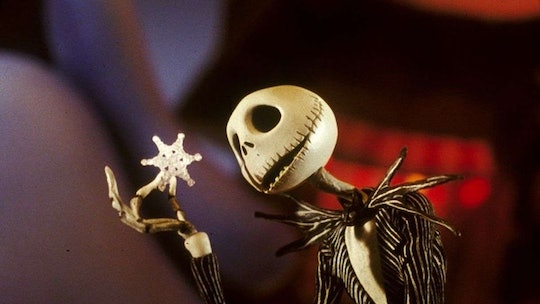 Jack Skellington Welcomes You To Freeform's 31 Days Of Halloween

Now that October is here, it's officially Halloween Time. You have 31 days to indulge in as much spookiness as you can stomach, and there's no better way to celebrate than by tuning in to the month-long Freeform moviefest designed specifically for that purpose. There will be plenty of family-friendly seasonal favorites to enjoy during Freeform's 31 Days of Halloween, including Nightmare Before Christmas.

Freeform will feature so many repeat viewings that you never have to worry about missing a movie. Nightmare Before Christmas is airing a total of ten times this October, which means if you skip it once you'll be able to catch it the next time. You'll hear "This Is Halloween" so many times in the next four weeks that you'll forget you ever knew another song. The first airing is on Oct. 1 at 5:05 p.m. ET, per TVLine, with another following on Oct. 2 at 4:10 p.m. ET. After that, you'll have to wait until the morning of Oct. 9 at 11 a.m. ET, but that week's a busy one for Jack Skellington: he returns on Oct. 11 and Oct. 12 at 9:20 p.m. ET and 12:10 p.m. ET, respectively.

Finally, there's an end of the month rush as Halloween approaches. Nightmare Before Christmas finishes up its run on Oct. 21, 22, 27, 28, and 29. Oddly, it doesn't show up on Halloween itself, which is devoted to Hocus Pocus almost exclusively. At various times over the next 31 days, you can find the residents of Halloween Town waiting for you.

But they won't be the only eerie denizens aiding in your celebrations this month. Freeform has the entire schedule for the 31 Days Of Halloween up on their website, and there are a ton of classic creepy films on offer. Many of them show up year after year on Freeform, but there are some new additions, too. You can enjoy the familiarity of Monsters, Inc., Hocus Pocus, Zombieland, ParaNorman, Edward Scissorhands, The Haunted Mansion, The Addams Family and Addams Family Values, as well as Scooby-Doo and its sequel. Plus there's Hook, Dark Shadows, the first two original Ghostbusters movies, The Corpse Bride, Hotel Transylvania, and Toy Story of TERROR!.

Already feeling overwhelmed by the entertainment coming your way? Well, we're not done yet. Scream, Scream 2, and Scream 3 will be joining in the fun this year, in addition to Monster House, Matilda, and Sweeney Todd: The Demon Barber of Fleet Street. Then there are some, uh, interesting choices that feel a little off-theme, like Iron Man, Finding Nemo, Finding Dory, Moana, 101 Dalmatians, and Zootopia. I suppose they could all inspire costume choices for your little ones, so that gets them through the door.

There are going to be several first-time premieres this October, too. Scared Shrekless debuts on Oct. 2 at 11:30 a.m. ET. On the same day, R.L. Stine's Mostly Ghostly: One Night in Doom House premieres at 2:05 p.m. and The Simpsons: Treehouse of Horror-thon follows for the first time at 8 p.m. Then on Oct. 4, there will be the debut of Monsters vs. Aliens: Mutant Pumpkins at 11 a.m., and Goosebumps at 9:30 p.m. on Oct. 5. You can check out two specials this year as well: Nights of Halloween Fan Fest at 8 p.m. on Oct. 5 and Decorating Disney: Halloween Magic at 11:30 a.m. on Oct. 7.

With so much to watch this October, there won't be a moment where you're not entertained.