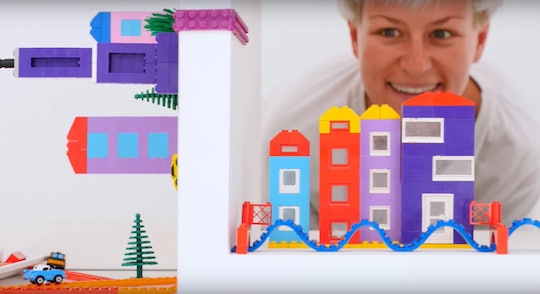 Should Your Toddler Play With Nimuno LEGO Tape?

Parents are getting excited about an intriguing new product that took the internet by storm this month. Nimuno Loops are a new toy block tape compatible with LEGO Blocks, Mega Bloks, Kreo and other major toy building block systems. The new toy product allows kids to stick legos on walls, windows, and even other toys. Since debuting online just a few weeks ago, Nimuno Loops has become one of the most talked about toys in parenting circles and playgrounds everywhere — and it isn't even available for purchase yet. Despite the excitement, though, parents of younger children might be wondering if the Nimuno LEGO tape is safe for toddlers, given how popular the traditional plastic stacking blocks are among kids of all ages.

Since Nimuno Loops aren't on the market yet, not much is really known about the toy's age limits, and the Nimuno creators did not immediately respond to a request for comment. What we do know is that the tape itself is a flexible rubber strip with an adhesive back. It comes in large rolls that total 6.5 feet in length. You can use scissors to cut the product into a smaller size for your children to use.

Best guideline? If you're comfortable with your child playing with LEGO and other toy building block systems, Nimuno Loops should be okay, too. If you're worried though, you can always wait to see the product reviews when it officially launches this summer.

Anine Kirsten and Max Basler, professional industrial designers and the creators behind Nimuno Loops, took their product to IndieGoGo for funding. After doing product testing for their new toy on their own computers and in Basler's garage, they hoped the raise $8,000 in capital to get Nimuno Loops off the ground. Kirsten and Besler's idea ended up being way more popular than anticipated, though, and as of March 19 the Nimuno Loops IndieGoGo campaign had raised $1,293,021. The toy has been backed by over 33,000 people and it still has 23 days before the crowdfunding ends.

The Nimuno Loops team hopes to have their product in backers' hands by July 2017. Since Nimuno Loops aren't ready to be sold yet, it's hard to definitively tell whether toddlers can safely play with them, without any health hazards, though Kirsten and Besler do have experience developing products for children. "Most of our work is focused on toys, particularly toys that engage children with the physical world and encourage creativity," the two posted on their IndieGoGo page. They've also "both contributed to various Ybike designs over the last few years," so they know what they're doing when it comes to producing safe toys.

Nimuno Loops have certainly made a name for themselves over the past few weeks. It will be a while until parents and kids are actually able to try the product out for themselves, but the future definitely looks promising for Kirsten, Besler, and their innovative product.