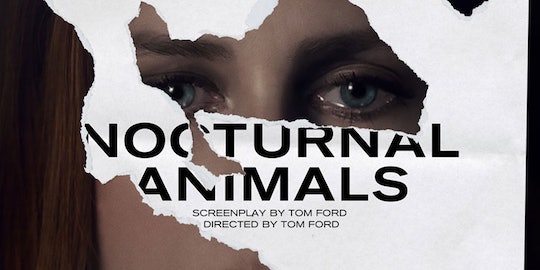 Is 'Nocturnal Animals' Based On A True Story? Tom Ford's New Movie Is Adapted From A Book

Oscar season – a.k.a. fall/early winter, a.k.a. the movie lover's sweet spot, AKA the time when Hollywood releases a batch of its most-acclaimed films in the hopes that they'll win the industry's highest accolades – is about to kick into high gear. Several films that are sure to take next year's awards shows by storm have already premiered (or are about to premiere) at international film festivals, like this month's Toronto International Film Festival (TIFF). One such film, Nocturnal Animals, recently had its North American premiere at TIFF on September 9, to very positive early buzz. The star-studded film's new trailer is intense and amazing, but is Nocturnal Animals based on a true story?

Starring some of the most talented actors of our generation, including Amy Adams, Jake Gyllenhaal, Isla Fisher, and Armie Hammer, Nocturnal Animals is a new film from fashion designer Tom Ford. The acclaimed director, who both wrote the screenplay and directed Nocturnal Animals, earlier co-wrote and directed 2009's critically-acclaimed A Single Man, starring Colin Firth. A Single Man was an adaptation of the 1964 novel of the same name by Christopher Isherwood.

The trailer for Ford's latest was released earlier today, and the striking clip is already generating even more buzz.

The film, which won the Grand Jury Prize after its world premiere at the Venice Film Festival nearly two weeks ago, looks like a master class in suspense-building and cinematography based on the nearly two-and-a-half minute long trailer. Considering previous performances by the principal cast, the acting probably won't be too shabby either.

Like Ford's earlier film, Nocturnal Animals' mysterious, thrilling plot isn't an original tale by Ford; nor is it based on any known true story. The two-time writer-director adapted the new film from an existing novel – Austin Wright's 1993 book, Tony and Susan. The film's title, Nocturnal Animals, is taken from the book-within-the-book at the heart of the original novel. The film tracks two plots simultaneously, according to The Hollywood Reporter.

Wright’s book [...] tells of a woman named Susan who receives a book manuscript from her ex-husband, a man whom she left 20 years earlier, asking for her opinion. [...] The book then tracks two stories: the story in the novel, titled Nocturnal Animals, which tells of a man whose family vacation turns violent and deadly; and the story of Susan, who finds herself recalling her first marriage and confronting some dark truths about herself.

Adams plays the female lead, Susan, an art gallery owner, while Gyllenhaal plays the male lead (and Susan's ex-husband), novelist Tony. Hammer plays Susan's current husband, while Fisher plays Susan's novel-counterpart character. Is anybody else shocked that this is the first time a film is capitalizing on Isla Fisher and Amy Adams' super-similar looks?

Nocturnal Animals is set for a November 18 wide release in the United States.