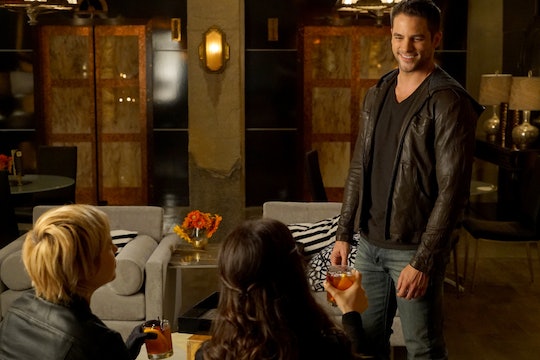 Is Noel Mary’s Second Kid On 'Pretty Little Liars'? He May Have An Interesting Past

It seems with every passing season of Pretty Little Liars the DiLaurentis family gets more and more twisted. If it's not a family member returning from the dead, it's a surprise relative that came out of nowhere. On the latest episode it was revealed the Mary Drake had another child around the same age as the Liars. In typical PLL fashion it's left up to us to figure who that mystery child is and there's already plenty of theories. One popular idea is that Noel Kahn is Mary's second child on Pretty Little Liars, which may explain why he's suddenly made a reappearance in Rosewood.

Noel has always been a sketchy character on the show. From dating Jenna and Mona, to blackmailing Aria with her secret relationship with Ezra, Noel has always been difficult to figure out. The fact that he's now back on the show after being gone for about three seasons only adds to the mystery that is Noel Kahn. Why is he back in Rosewood and more importantly why is seemingly working with Jenna? Although Noel has had no contact with Mary Drake yet (that we've seen anyway) it seems very possible that he is her son. For one thing, when Noel was helping Ali, she was blackmailing him with something and we still don't know what that was. It's unlikely that Ali knows about Noel's true parentage, but whatever secret she knows about him could be a clue about his connection to Mary Drake hence why it hasn't been revealed after all this time.

Also, as previously mentioned the timing of Noel's return is suspicious. Charlotte is killed, Mary Drake arrives, A.D. starts sending texts, and then Noel decides to come back to town? It's not a big leap to assume all these things are connected. Moreover, Jenna was dedicated to helping Charlotte find her mother and now that Charlotte's gone it's possible Jenna's doing the same thing for Noel. Whether or not Jenna knows that Charlotte and Noel's mothers are possibly one and the same remains to be seen, but the fact that they're working together and Noel is clearly becoming impatient about something seems very curious.

If that wasn't suspicious enough, the fact that A.D. burned Noel's file definitely makes it look like Noel is the missing child. However, as is typical with Pretty Little Liars that could've been a bait and switch, setting us up to be surprised by the reveal of Mary Drake's real child later. It'll probably be a while before we know the truth, but for now, Noel is the most likely suspect.