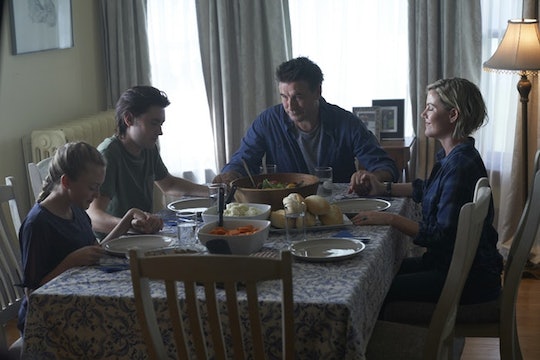 Now premiering on Netflix, Northern Rescue is about the West family who moves from Boston to a place called Turtle Island Bay after the matriarch of the family dies of cancer. John West (William Baldwin) must navigate raising grieving teenagers while mourning his wife and starting a new job as a search and rescue commander. Unfortunately cancer effects many families and after the death of a loved one, sometimes a fresh start is necessary. So it feels real, but there is no evidence that Northern Rescue is based on a true story.

The Wests move near the kids' Aunt Charlotte — their mother's sister — who is grieving while struggling to decide whether to start her own family. All signs point to this being a very heartwarming story of family healing and growth, but there's a twist...they live in an aquarium. I'm serious.

As oldest daughter Maddie (Amalia Williamson) explains to a woman in the trailer below who thinks "I live in a fish tank" is a metaphor for a small town, "No, I mean I literally live in a fish tank." I'm not exactly sure how that's going to work either, but there do seem to be pretty giant (and awesome) fish around their home.

Northern Rescue is a chance for Baldwin to borrow the spotlight from his brother Alec has been hogging it for a very long time. He spoke about how his family mirrors his characters' in an interview with Variety. He and his wife Chynna Phillips both grew up in hectic famous families (Phillips' parents were members of the music group The Mamas and the Papas). "When I told [Northern Rescue producers about] the contrast of our childhoods and how that came together for us to try to figure out how to raise our kids, they were like, 'Sold!'"

The family show is actually a Canadian program and originally premiered its 10 episodes on the national CBC network. Now American audiences get to experience all the love (and drama) for themselves. And who doesn't love some good old fashioned teen angst and fatherly gruffness? I know I do. The show may not be based on real people per se, but it's clear that Baldwin was inspired by his own family's experiences to bring this fictional family to life. And in another interview with TV Insider, Baldwin explained that what he really wanted to do with this show was tell the truth about what families are really like.

Baldwin told the outlet that he really needed to be able to get into the real life nitty gritty of what being a teen is. And that includes sex, drugs, and possibly violence. "We’re attempting to define what it means to be a family today," he says. And I guess there's just no tiptoeing around that.

So no, it's not an exact match. But it's close enough.

Editor's note: An earlier version of this story misidentified the title of the show. The error has been corrected.