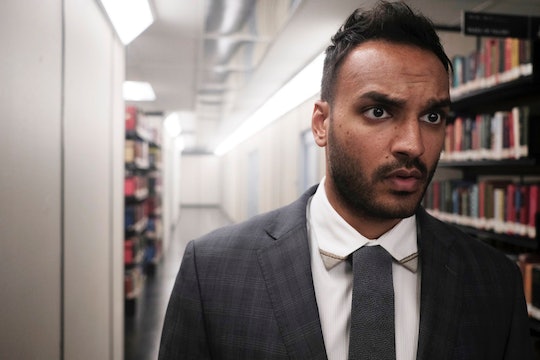 Penny has been dealt one bad hand after another on The Magicians, sometimes literally. His hands were severed and grew back wrong, then he developed super cancer, became forever indebted to the library, and got trapped on the astral plane when his body died. A Penny from another timeline has taken the original Penny's place in the crew since he vanished into the Library, but is Old Penny coming back on The Magicians?

While talking to Hypable, showrunner Sera Gamble revealed that snacking on a cupcake in the Underworld wasn't the end of Old Penny's journey. She confirmed that he was dead and continuing his contract with the Library, but said viewers would see him again sometime in Season 4. His story would even converge with that of his usurper, the Penny from the 23rd timeline. Gamble wanted to see the two of them talk to each other "in a non-cheesy way that really feels earned."

She didn't say when the scene would happen exactly, only that it would occur in "an episode in the middle of the season." Gamble felt she wasn't the only person eager to see Arjun Gupta act opposite himself as two different versions of the same character. Both Pennys are sure to have a lot to catch up on, because their lives have diverged in drastically different ways.

Though it might feel like it's been a while since viewers got to see Old Penny, it doesn't seem like it was ever anyone's intention to write him off and wholly replace him with Penny 23. Shortly after Penny's death, Gamble and her co-showrunner John McNamara told TV Guide that he would try to make his way back to the world of the living. Though he hasn't had any success with those attempts, it's hard to believe that all of his friends would leave Penny to languish in the Underworld forever. Now that a battle against the Library is brewing, it might be time to revisit the original Penny.

Especially because Gamble told Nerds and Beyond that it was "too tempting" to explore what was going on with Penny while he was stuck in the Underworld. She knew everyone wanted to find out what Penny was up to and she assured fans that there was "a point in the season where we might see what's going on with him now." Penny hasn't been as active as his alternate timeline counterpart lately, at least not onscreen, but it sounds like that will change as the season goes on. Hopefully fans will get a thorough update on the last few months of Penny's life, because he's been MIA for too long.

In an interview with Collider, McNamara said the show wouldn't ignore the fact that there were two Pennys in the timeline. They may remain separate for the next few episodes, but both Pennys will be coming into contact with each other soon enough. That should complicate matters considerably, and perhaps spin Penny's storyline in yet another unexpected direction.