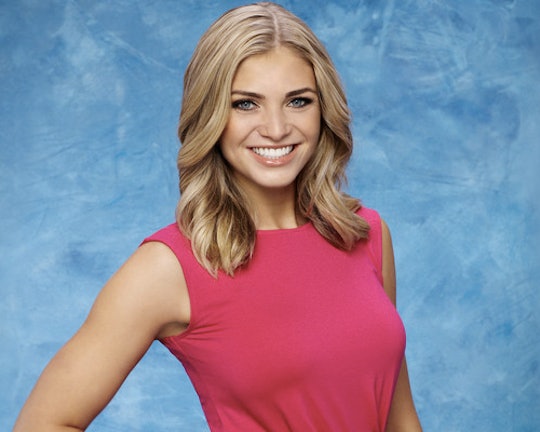 Is Olivia Using 'The Bachelor' To Get Famous? Here's Why It's Not Up For Us To Judge

Oh, you Bach fans, the season has just begun, and already you're throwing shade at the contestants. But that's all part of the fun in this game of love and roses. One shade-worthy rumor that's been circulating is that Olivia Caridi is using The Bachelor to get famous. According to InQuisitr, Olivia, who was a news anchor and TV personality before filming began, had a serious boyfriend she left just before leaving Virginia to film the show. Bach pundits have already begun speculating that Olivia, who won the first impression rose, isn't really looking for love, but for a way to ignite her broadcast journalist career. And that's entirely unfair.

Olivia told Ben Higgins on the first episode of this season's The Bachelor that she left her job at the WCYB station because she was intent on becoming Mrs. Higgins. For the record, WCYB's website still lists Olivia as an anchor, and this is purely my own speculation, but when I was Twitter stalking her (c'mon, people it's my job, k?) I noticed that she's pretty ambitious, having only recently graduated college and kickstarted her career in TV. Caridi studied at the Bob Schieffer College of Communication, where she worked with CBS News' Bob Schieffer and Scott Pelley in order to line up a post-grad gig, according to WCYB's website. So to me, this means that Olivia is pretty career-minded.

But does that mean she still can't long to be Mrs. Higgins?

In order to figure out whether Olivia is in the game for love or fame, you could watch the show and wait to see. But here's the problem with assuming that she's only out for love: it furthers the sexist belief that women are only "good for" or "good at" one thing. Caridi, as a cast member of the show, is totally entitled to be in search of a relationship that's fulfilling. She's also totally entitled to do what she wants with her career when she wants. We all have that right, whether or not we're searching for love on national television.

Pitting Caridi as a woman "using" Higgins and The Bachelor as a means to get famous isn't just sexist, it's wrong. None of us have any right to assume what her motivations are for being on the show, and beyond that, it's way too early to speculate on her (or anyone's) reasons for being there.

Olivia, as does every woman on the show (and every man!), has every right to use the platform for what she wants. If she wants to find love, more power to her! If she wants to help build a following while she hopes to find love, great for her! If she's hoping this will catapult her into a career of reality TV fame and stardom, then that's OK too. Obviously we want to hope that she does't hurt anyone in the process (or get hurt), but therein lies the problem: it's way too early to spend any time deliberating Olivia's personal choices for being on TV. We don't know her, and you know what they say: Assuming only makes an ass out of you, me, and the rest of The Bachelor's nationwide audience.

Plus, it seems from her social media accounts that she takes living a fulfilling, intentional (and spending it with a partner) pretty seriously:

Regardless of her intentions, no matter what Caridi is looking for, that's 100 percent her prerogative. It's totally fine to hope that her actions are absolutely genuine (finding someone to share your life with, if that's what you want, is a beautiful thing), but it's way too early on to insist or assert that she's on the show just because she's hoping to be a star.

With the rest of the season ready to unfold week after week though, I'm going to give her the benefit of the doubt — and fans should too.