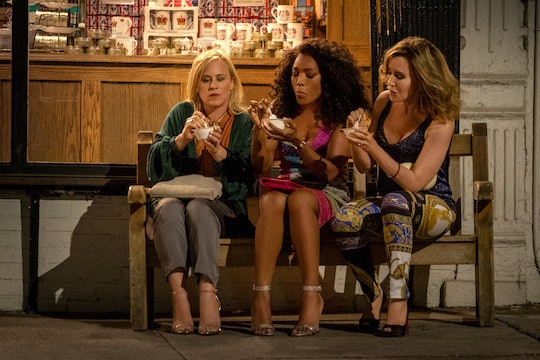 Netflix's 'Otherhood' Has All The Makings Of A True Story

Three moms get a gift on Mother's day that they definitely are not expecting in the new Netflix film Otherhood. It's about mom friends whose three adult sons each forget Mother's Day. Naturally, the moms take a trip to Manhattan to teach their sons a lesson and end up learning something about themselves. Kids probably forget Mother's Day all the time, but is Otherhood based on a true story?

A road trip with friends to yell at your sons may sound like fun to some people, but I think it's good news that I could find no evidence of Otherhood being based on a true story. I have no doubt that reading this post could possibly inspire someone to pick up the phone and call their mom to apologize. Or, perhaps it sparks a mother to get in the car and speak her mind to one of her kids. Both scenarios could result in good outcomes, so you're welcome.

When the heart-to-heart is over, go watch Otherhood together, especially if your nest is newly empty. The movie's co-writer and director Cindy Chupack — who has executive produced Sex And The City and Modern Family told TV Insider that this stage of life should be celebrated rather than mourned. "The women need to figure out who they are in this stage beyond motherhood — otherhood — which might be a beginning rather than an ending."

Angela Bassett stars as Carol in the film, and she has a son who is still in school, but she told NPR that she definitely understands the struggle the women are having in the film and appreciates the power female friendships have to transform someone. "I think they are everything," she said of her friends. "I really am made just bigger and more interesting by their conversations and by the time that I spend in their company."

Bassett is in her early 60s, and even though she's not dealing with an empty nest she's always pushing herself out of her comfort zone. As reported by The New York Times, she shocked her followers a year ago when she posted a bikini shot to Instagram. Like Carol and her friends, Gillian (Patricia Arquette) and Helen (Felicity Huffman) in the film, "I just try to blossom every day, I think, in some small way. It can’t always be a bikini shot," she told The Times.

While Bassett continues to thrive, co-star Huffman has entered a more difficult stage in life having recently pled guilty to involvement in a college admissions scandal. Bassett hadn't known Huffman before working with her on Otherhood, but told The Times that she respects how Huffman handled the situation. “We all make mistakes. None of us is perfect,” Bassett said. “I think Felicity handled these unfortunate circumstances in a mature, responsible way. She held herself accountable and didn’t make excuses for her decisions, and I can only respect that.”

You can watch Carol, Helen and Gillian rediscover their purpose at home on your couch or in a recliner with popcorn at your side because Otherhood drops in theaters and on Netflix Aug. 2.