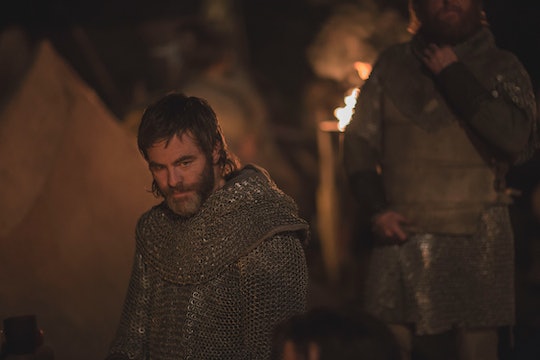 Netflix's latest epic period tale stars Chris Pine as Robert the Bruce — defeated nobleman in 14th century medieval Scotland who ultimately becomes an outlaw hero, fighting for Scotland's freedom. For those of you who think some of this sounds familiar, you might be wondering "is Outlaw King based on a book?" This one's complicated, so sit tight.

While Robert the Bruce was King of Scots from 1306 until his death in 1329, and all accounts point to his true story, Outlaw King may be influenced by many things with no conclusive information pointing to one specific book. There are many accounts of Robert the Bruce, and how he pertains to the history of Scotland's freedom from English rule. However, tedious internet searches reveal there is, in fact, a book of the same moniker (Outlaw King: Renegade Scots), written by USA Today bestselling author, Julie Johnstone.

Johnstone's book synopsis of this version of Outlaw King reveals Robert the Bruce (heir to the Scottish throne) "will do anything to release his country from English rule." Robert has enemies on both sides of the war, including Elizabeth de Burgh — goddaughter of the King of England — who's ordered to seduce Bruce (leader of the rebellion) or risk having her cousin killed. Unexpectedly, she gets a little too close to Robert and can no longer be part of his destruction. Johnstone concludes adding, "Robert and Elizabeth must determine if they are each other’s biggest threat or greatest source of strength. And moreover, they must decide how much they are willing to risk for the one thing neither ever imagined they’d find with the other—extraordinary, boundless love."

The official synopsis on the Netflix website for the movie says Outlaw King is, "The untold, true story of Robert the Bruce who transforms from defeated nobleman to outlaw hero during the oppressive occupation of medieval Scotland by Edward I of England." While similar, the rest is a bit more ambiguous adding, "Despite grave consequences, Robert seizes the Scottish crown and rallies an impassioned group of men to fight back against the mighty army of the tyrannical King and his volatile son, the Prince of Wales."

To further expand on that, The Verge gets more specific saying the movie starts in 1304 Scotland when King Edward I (Stephen Dillane) defeated William Wallace's rebellion (you guys remember Braveheart?). Their description continues, "The Scottish Lords were forced to swear fealty to the cruel king, who continued to tax them heavily as reparations for the war. To further cement bonds amongst the conquered, King Edward forces the marriage of his goddaughter, Elizabeth De Burgh (Florence Pugh), to the son of the leading Scottish noble, Robert the Bruce." So far, this sounds similar enough to Johnstone's Outlaw King. Ultimately, peace doesn't last, King Edward goes bonkers and kills William Wallace and that's when Robert renounces his oath to the crown and becomes, well, an outlaw.

In an interview with Entertainment Weekly back in September, Scottish producing partner, Gillian Barrie, said of Outlaw King, "Robert sacrificed everything he once owned to set Scotland free. He was the second richest person in the British Isles. He gave up everything to take on the most ridiculously powerful army and king. He had to go to hell and back."

So, while I liken myself to a true internet detective, I can't locate anything that definitively points to the Netflix film being a direct translation from Johnstone's book, but maybe there doesn't need to be any. With the information readily available about Robert the Bruce and his fight for freedom, perhaps filmmakers were inspired by a number of things: books, articles, or the true story of Robert himself.