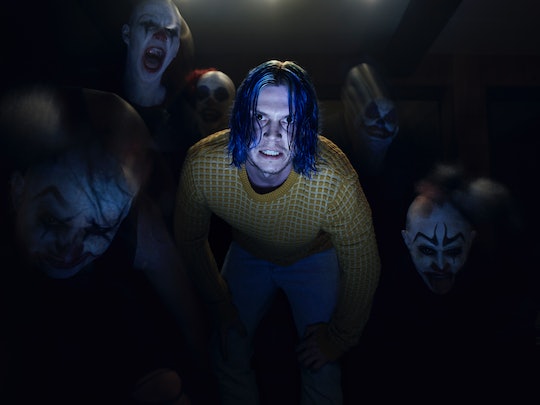 Well, viewers can't accurately predict everything that happens on American Horror Story; what fun would that be? Since the premiere of AHS: Cult, some people on social media believed that Ally and Ivy's son, Oz, was the biological son of Kai. The topic of his birth parents came up in the premiere, which tipped off observant viewers that this topic was going to be important. The theory certainly made sense, given how obsessed Kai was with Ally. But is Oz really Kai's son on AHS: Cult? Kai certainly believes so, and he convinced Oz himself in the latest episode.

A popular theory this season is that Kai is Oz's biological father. This is because of a couple of different things — one of which being the fact that Winter brought up Oz's parents in the premiere episode. American Horror Story isn't one to cram unimportant information into its episodes, so the fact that Winter asked such a personal and seemingly irrelevant question was a red flag. Secondly, Kai has been obsessed with Ally. After the election, Ally suffered from PTSD and had a number of triggers. Kai set his killer clowns out, not to murder Ally, but to terrorize her and cause her to have traumatic episodes. Even Ally's wife, Ivy, was in on it. Why would Kai make Ally suffer, but not kill her like he does with his enemies?

Fervent AHS fans on Reddit wanted answers to these questions, and they almost hit the mark. In episode "Mid-Western Assassin," viewers learned that Ally carried Oz and was impregnated by a donor. Reddit user jacobigrat was just one of many who believed that Kai was the donor for Oz. Another Reddit user, Anon33157, took it further saying that Oz is so special because Kai wants to groom him to be a future cult leader. This is evidenced by his full name, "Ozymandias," named after a poem by Percy Bysshe Shelley. In the poem, Ozymandias is the "king of kings," and is the ruler of a fallen empire (but he's so full of it he doesn't even know his kingdom is destroyed).

In the latest Cult episode, "Drink the Kool-Aid," viewers were finally given canonical answers about Oz. As it turns out, the majority of viewers were wrong: Kai is indeed not Oz's father. His donor was some other white man. Kai, however, firmly believes that he is the father. He has apparently been a longtime donor for the clinic where Ally and Ivy went. He told Oz this story, and Oz believed it as well. Ally took it upon herself to go to the clinic and confirm that Kai is not the father — however, she's continuing to have Kai believe that he is as way to carry out her master plan.

Ally faked Oz's donor papers to make it seem like Kai is the father. He also believes that Oz is his "Messiah Baby," though fans now know that this is all just a ruse. While online theories weren't completely correct, they are in Kai's mind. The episode ended with Kai insisting that he, Ally, and Oz can be a "real family." I'm not sure what Kai means by this, but I believe he probably has a plan for Oz. I also can imagine the wrath that Kai will implement if he finds out that everything he believes is actually fake news. I'll let Redditors theorize about that — until the next episode, anyway. But in the meantime, I just hope Ally knows what she's doing.