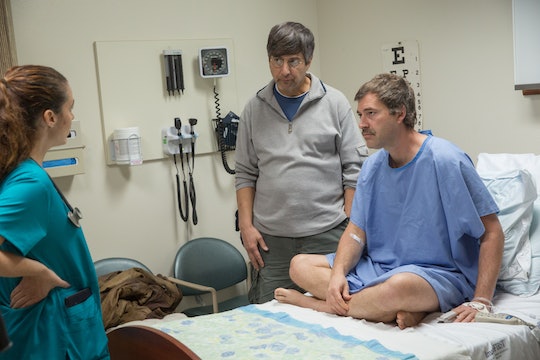 Mark Duplass wrote the new movie Paddleton — a Sundance film which he costars in with Ray Romano that's now streaming on Netflix — in his favorite improv style. He wrote the movie with his frequent collaborator Alex Lehmann, and the script is only 20 pages long. You didn't read that wrong. That's a really short movie script and more content needs to come from somewhere. So is Paddleton based on a true story?

To put it simply — no. Duplass told the LA Times that he loves to write mundane male friendships and the subject of death was the inspiration. Romano and Duplass play Michael and Andy, two guys who live in the same apartment complex. It's a simple friendship, really. They spend most of their time together eating pizza, telling awkward jokes and playing a game they invented called Paddleton. It's all very normal until it becomes terminal. Because when Michael is diagnosed with terminal cancer, he asks Andy to help him end his life.

Duplass and Lehmann previously worked together on a film created with the same improvisation style. Blue Jay stars Sarah Paulson and Duplass as former high school sweethearts who reunite one day in their small town. Lehmann directed the film.

When asked why he wanted to write Paddleton as an improv Duplass told the LA Times, "...When people connected with [Blue Jay], it made me feel kind of excited that people still wanted to watch really small movies about small things. So I wanted to go even deeper into that with this movie, and Alex was such a great partner last time, that we figured, let's take another run at it."

Duplass was at the premiere of Romano's film The Big Sick when he realized the actor — perhaps best known for his role as a suburban dad in the sitcom Everybody Loves Raymond — would be perfect for the role.

Lehmann wasn't so sure. He told The Playlist, "I was like, 'The guy with the sitcom? This isn’t a sitcom. This is the opposite of a sitcom.' I’m an idiot for thinking that, because I watched 'The Big Sick' and I realized this guy’s got it all. He’s got a lot of soul and depth."

Romano said in the LA Times that he learned to love exploring "little things" when filming Raymond. The show often explored small problems within relationships.

But something else drew Romano to the role that might surprise you — the funny man loves a good heartbreaking story. "I don't know why, but it's very cathartic for me to feel and to cry. I don't know if that's normal. I enjoy things that make me feel that emotion," he said. Yes, Mr. Romano, it's perfectly normal to feel and to cry. You are not alone.

Romano admitted to the LA Times that the improv-style process of filming Paddleton was intriguing but scary. But meeting Lehmann and Duplass and learning about the process helped him make the decision to come on board. Apparently, he likes a side of fear with his heartbreak. "I thought it was a little good to scare myself," he said.

You can stream Paddleton on Netflix right now, but before you press play, maybe grab a box of tissues.