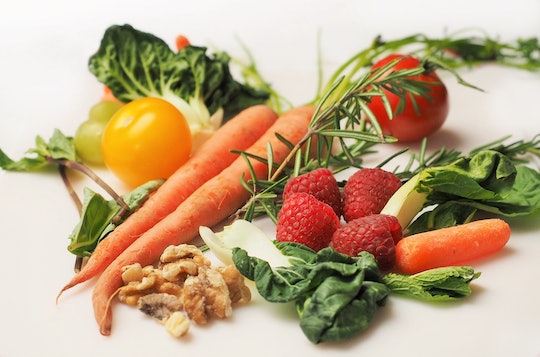 Is Paleo Safe During Pregnancy? Here's What You Need To Know

Pregnancy is synonymous with having to give things up, especially when it comes to food. Sushi, wine, cheese — the list of questionable items goes on and on. But what about particular diets, like Paleo? You know that it's of the utmost importance to eat well and get the right nutrients when you're pregnant, but is Paleo safe during pregnancy? Changing your lifestyle to go Paleo is a process and so is changing your lifestyle when you become pregnant, but do you need to give up your Paleo lifestyle when you conceive?

Loren Cordain, founder of the Paleo diet movement wrote on her site that the Paleo diet can greatly improve your chances of getting pregnant. But according to Healthline, there isn't much research available on the specifics of eating Paleo while pregnant. There is, however, research on pregnant women eating high-protein, low-carbohydrate diets, which are some of the basic principles on which the Paleo diet relies. Diet and nutrition are important for your unborn baby, which is why engaging in a restrictive diet while pregnant could be unsafe.

According to a study in the American Journal of Clinical Nutrition, eating high amounts of red meat and low amounts of carbohydrates during pregnancy is associated with reduced fetal growth and low birth weight, making a strong case against the Paleo diet while pregnant. Another study done by the American Heart Association's Hypertension journal found that women who consumed a high amount of meat and fish during late pregnancy wound up giving birth to babies with higher systolic blood pressure later on in life. If you're thinking about keeping a Paleo diet during pregnancy, it may be time to think again.

Your carbohydrate intake is also important to consider in regards to your pregnancy diet. Though the Paleo diet doesn't encourage followers to eliminate all carbohydrates, it does encourage limiting your intake. According to Paul Jaminet, author of Perfect Health Diet, when 30 to 40 percent of your diet is made up of carbohydrates, it's considered a neutral diet, and neutral diets place minimal stress on your body during pregnancy. Jaminet goes on to state that a diet comprised of 40 to 50 percent of carbohydrates is likely to promote fertility, but that it's important to stick with the right kinds of carbs. For all diets, including those of pregnant women, focusing on starch intake rather than sugar intake is key.

PaleoLeap, a website dedicated to Paleo diet recipes and tips, breaks down the nutrients you need while pregnant, and where you can find them in a Paleo diet. PaleoLeap also recommends certain supplements and changes you can make to your Paleo diet in order to create a more nutrient-rich environment for your baby to grow in. Like any diet you may be interested in, making sure your body is getting all the proper nutrients it takes to nurture a baby is the most important thing to pay attention to. Regardless of whether you're already on the Paleo diet, or you're considering making a change to your diet while pregnant, it's important to consult your doctor about the necessary nutrition and any changes you may want to make.