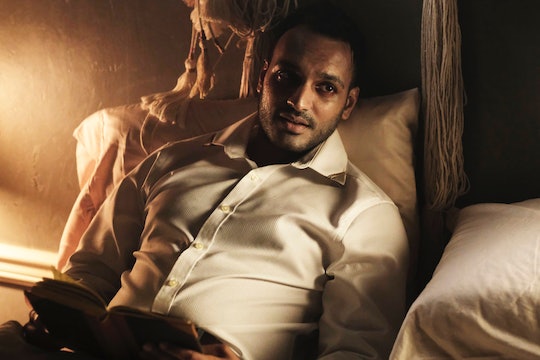 Penny's Story Took A Surprising Turn On 'The Magicians'

Poor Penny. Nothing can ever seem to go his way. First he loses his hands, then he contracts a fast-acting magical cancer, which has now resulted in fatal consequences — or has it? Wednesday night's episode of The Magicians, titled "The Losses of Magic," seemed to conclude with his demise, but is Penny really dead on The Magicians? By the end of the hour, his fate was left hanging in the balance, though I wouldn't be too worried about it just yet.

This series has been known to throw a few curveballs at fans and sometimes stray away from the books. However, I seriously doubt the show plans to off one of its most beloved characters. But I'm getting ahead of myself. Let's go back for a minute and try to discern what actually happened. It all started when Kady — now in possession of Mayakovsky's magic battery — summoned a demon who could hopefully remain the cancer from inside of Penny. After what looked like a grueling and painful process (those pointy sharp demon hands did not look like fun), said demon pulled out the cancerous substance. It worked, all was right with the world again, correct? Not exactly. Just when you think Penny's woes are over, he takes a turn for the worse and seemingly dies.

But the really interesting part was that while Kady was crying over his lifeless body, Penny's spirit (or maybe an astral projection of Penny?) was watching everything that was going on in disbelief. As you can imagine, this guy was shook and clearly had no idea what the heck was going on.

So what can viewers take away from all of this? The easy answer is that he's dead, but his astral abilities are somehow preventing his spirit from passing on. Is that a thing that can happen? Maybe! But when you're dealing with a series that centers around magic, almost anything is possible, so it'll be interesting to see how this gets explained. Is there a way to bring him back to the land of the living? What caused him to end up in this predicament in the first place? I'm sure all of these questions will be answered in time, but for now it's proving to be quite a big mystery.

I think we can all agree that Penny is a beloved character on the show, so his departure would be devastating to say the least. But that could end up being his saving grace. Season 2 is only just getting started and I feel like we've barely seen any of him. He needs more time. He deserves more time. Plus, why introduce a demon and spend all this time finding a way to rid him of his cancer if it wasn't going to amount to anything? It just wouldn't make any sense.

Sure, it's frustrating not to know what to expect since we have to wait a whole other week before getting some real answers, but then again, isn't that part of why we love this show to begin with? I wouldn't get too worried about it though. If these characters have proven anything over the years, it's that they're survivors and are capable of handling pretty much anything that gets thrown at them. This can't be the end of Penny's story. I won't allow it. So do I think Penny is currently dead right now? Possibly. But whether or not I think he'll stay that way is a whole different story.