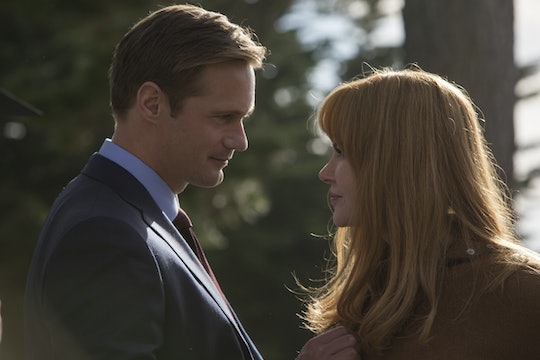 Perry's Fate May Be Grim On 'Big Little Lies'

There was a lot to take in during the Big Little Lies series premiere, but one aspect that immediately comes to mind is the dead body that gets found during a school trivia night event at some point in the near future. We see various people getting interrogated by the police, but we have yet to even find out whose body it was that's been found. And while that leaves us with several possibilities (given that some of the main characters haven't appeared in these flash-forwards and could therefore be the victim), I'm starting to think Perry is dead on Big Little Lies and here's why.

First of all, he's already proven that despite his initial description of being an all-around perfect husband, he is actually anything but. While it was only a brief moment in the episode, viewers watched as his temper got the best of him when Celeste didn't agree with him about having their sons avoid Ziggy at school after he was accused of harming a fellow classmate. (He insists he's innocent, though.) Celeste isn't as willing to point the finger of blame at the new kid, which makes Perry irritated. So irritated, in fact, that he grabs Celeste's arm pretty aggressively. And the fact that she isn't surprised by this abrupt show of force implies that it's happened before.

Spousal abuse is a very real problem that countless people face and suffer from each day. So not only is this storyline important, it could be the key to figuring out who the killer is and who was their target. Given what we've seen of Perry's behavior, it'd be easy to cast him as the killer, however, I think it also sets him up to be the potential victim. Violence is usually met with violence, so either Perry attempts to evoke such force on someone else and ends up paying the ultimate price for it, or Celeste finally reaches a boiling point and make sure he can never lay hands on her again.

Of course, this is all just speculation on my part, but I could easily see the story playing out either way — both of which result in Perry's body being discovered. It'd be somewhat fitting to see him die at the hands of the person he spent years controlling and abusing, but then again, maybe one of Celeste's friends gets wise as to what he's really like and decides to give him a taste of his own medicine.

Those who have read the book know how this all plays out and whether or not this is accurate. But regardless, I think Perry will somehow play a role in the Trivia Night crime — the only real question is: will he be the victim or a suspect?