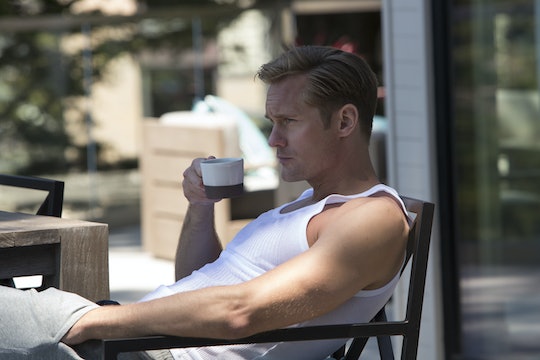 Perry May Be Hiding A Big Secret On 'Big Little Lies'

From the start of Big Little Lies, it became clear that Jane wasn't like the other Monterey parents. For one, she's new in town, so she doesn't know how the community operates, and they in turn don't know her secrets. Another difference is that she's a single parent, but she doesn't even talk about Ziggy's father. Being the nosy people they are, the helicopter parents want to sniff out the truth about Jane. Honestly, I do too. But is it possible that Ziggy's father is already in Monterey? Is Perry Ziggy's dad on Big Little Lies? It wouldn't be the only shock in the series.

Although Jane is pretty secretive about what happened, she did reveal to Madeline how Ziggy was conceived. She was assaulted by a man (who claimed to be) named Saxon Banks. Madeline took it upon herself to find out more about this man, and through her internet sleuthing, she came up with an interior designer in San Luis Obispo named Saxon Baker. Baker could've easily lied about his name to save face. On last Sunday' episode, Jane made her way to visit Baker to find out whether he is her rapist since she doesn't remember his face clearly, but she remembers his voice. Could Saxon Baker be Ziggy's father? (Warning: major spoilers from the novel ahead!)

What happened between Jane and Saxon left us wondering at the end of the latest episode. We didn't see them interact much — Jane arrived at Saxon's office and rushed out soon after. Did her running away from him mean that he is indeed her assaulter? Or did she realize Madeline was totally off? If you read the novel Big Little Lies, you may lean towards the latter. At the end of the book, it's revealed that Perry is Saxon Banks — he used the name of his cousin while on business trips. He raped Jane, which resulted in her pregnancy with Ziggy.

While Perry is indeed Ziggy's dad in the novel, it's not certain as of yet that the same will occur in the series. Already I've noticed some differences between the two; Madeline's relationship with Joseph is a notable example. How Saxon Banks is handled is also different: in the novel, Celeste recognizes the name as Perry's cousin and suspects he is the one who hurt Jane. Here, though, Madeline finds the interior designer. While I'm inclined to think such a reveal will stay the same in the adaptation, the series has already surprised me. We'll just have to keep watching to see how they handle this huge plot point.