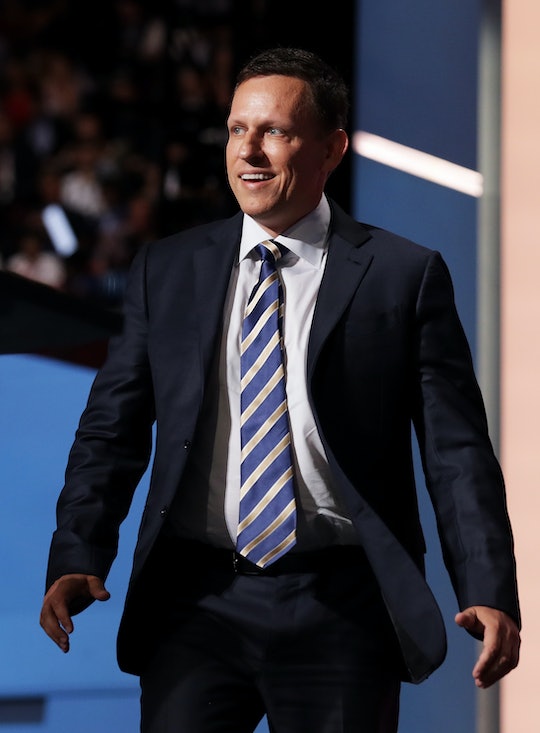 Perhaps you've sensed him, as you've walked the streets of Silicon Valley at midnight. A fluttering of bat-wings pierced your awareness, a glint of fangs flashed in the dark. "I want to suck your blood," Peter Thiel, the vampire, murmured in your ear. "Also, sign up for Paypal."

Or maybe you saw him in the hallways at school. You were the clumsy new kid. He was strangely pale, and never went into the sun. You woke up one night to find him in your room, watching you sleep. You thought it was true love. But then he pulled off his mask, revealing the face of a 48-year-old venture capitalist and billionaire who recently endorsed Trump at the RNC. Edward Cullen was Peter Thiel all along, and he just wanted your young blood so he could live forever.

All joking aside, Peter Thiel is not an immortal vampire—yet. But in his quest to make humans (or at least himself) live longer than they're probably supposed to, he has expressed interest in a new technique called parabiosis, in which the blood of young people is infused into the veins of older people in order to "rejuvenate" them.

When news of Thiel's interest in, as Thiel-nemesis Gawker put it, "harvesting the blood of the young" leaked out, people on Twitter immediately had a field day.

In an interview with CBS, Thiel expressed his views on death, saying, "There are all these people who say that death is natural, it's just part of life, and I think that nothing can be further from the truth." He has also previously said he doesn't believe in "the ideology of the inevitability of the death of every individual," which I always thought was more of a fact than an "ideology." And though he's previously looked into gene modification, and healthy living, such paltry measures are clearly no longer enough for him. He must have blood, and it must be young.

So far parabiosis is just in trial stages for humans, although it has previously been tested on mice, but Peter Thiel is watching. Peter Thiel is always watching, and he will continue to do so until the end of time. The oceans will rise and humans will tear one another apart, and Peter Thiel will wander this ravaged Earth, alone, immortal, until the sun winks out and the planet explodes. And even then, he will not die. He will rise from the swirling ashes and float through space, whispering to the stars that he has a great idea for a start-up.