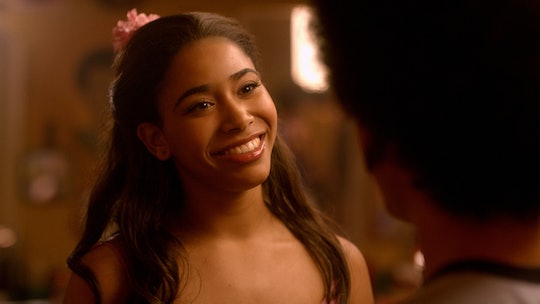 'The Get Down' Introduces A Disco Hit

After Mylene Cruz dropped her smash hit "Set Me Free" on The Get Down, it was clear the disco stardom she longed for was finally within her grasp. Part II of the show's first season continued to chronicle her musical rise, and Episode 7 saw her performing on television for the very first time. When Mylene's hero Misty Holloway was unable to perform on the show Platinum Boogie, Mylene and the Soul Madonnas stepped up to play in her stead, promoting Mylene's second single, "I'll Keep My Light In My Window." But is Platinum Boogie a real show?

Hosted by Cool Calvin Moody, Platinum Boogie boasted both fictional acts like Misty and Mylene next to real life bands like the Village People and Earth, Wind & Fire. The show definitely seemed similar to any number of real life disco dance shows from the 1970s, from the clothes to the set to the advertisements. However, despite the verisimilitude and the footage of real bands playing, Platinum Boogie does not appear to be a real show at all and Cool Calvin Moody was not a real person. Platinum Boogie was a show in the vein of Soul Train or Solid Gold, but fictionalized.

Creating a fictionalized show meant that The Get Down didn't have to worry about recreating a real show down to the very last detail; they could be inspired by a variety of shows to create something that seemed authentic even if it wasn't necessarily factual. The show often blends fiction and reality in that way, and is able to make a fake show like Platinum Boogie feel more authentic by showing real performers alongside fictional ones.

The footage shown of Earth, Wind & Fire performing their hit song "September" on Platinum Boogie is easy enough to find online, but it's more difficult to source exactly where it was originally aired. It's possible it came from a 1978 performance from Top of the Pops, which would check out with the timeline, but the official Earth, Wind & Fire VEVO account doesn't provide the details.

Still only at the start of her career as a singer, Mylene's appearance on Platinum Boogie gave viewers the chance to see how she would handle such a big opportunity. While Mylene was nervous before stepping out in front of the cameras, once the music started to play she was a pro. Her performance, quite literally infused with a heavenly glow, hit all the right marks: it showed off Mylene's talent and charm, cementing her as a star.

But her interview was less successful. Mylene was being pulled in twenty different directions at once: she had to please her religious family, the people from the record label who were banking on her success, her friends, and even Zeke. To balance all of that without letting anyone down was a tall order, and whether or not Mylene would be able to keep it up for the second half of Season 1 would be an ongoing struggle.