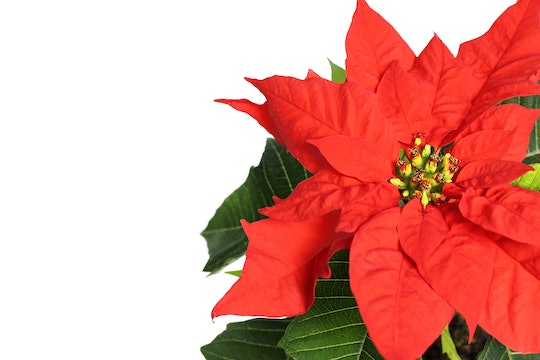 Is Poinsettia Safe For Babies? The Answer May Surprise You

With their distinctive red leaves, poinsettia plants are a favorite holiday decoration. But concerns about their potential poisonous nature, especially for dogs, causes many parents to ban the plants from their homes. So are poinsettias safe for babies, or does the holiday plant pose a danger to kiddos who might touch or eat the bright red leaves? As it turns out, the belief that poinsettias are poisonous may be nothing more than an urban legend for the holidays.

In general, poinsettia is not poisonous to humans, and the plant does not pose a significant risk to babies, according to BabyCenter. Although eating a large amount of the (reportedly not tasty) plant could cause intestinal discomfort, poinsettia ingestion has never killed anyone, as further explained by Baby Center. The actual dangers posed by poinsettia are very different from its reputation as a poisonous plant.

Despite their rumored toxicity, poinsettias remain a wildly popular plant. In fact, around 34 million poinsettias are sold each year, making them the most popular flowering potted plant, according to the University of Vermont Department of Plant and Soil Science. Just how deadly can it be?

Well, poison control centers do not recognize poinsettias as a severe threat to children. According to the National Capital Poison Center (NCPC), poinsettias are classified as an "irritating but not fatal" plant. (That phrase applies to so many things in life, right?) At any rate, poinsettia is not harmful or fatal to small children, and ingesting it will produce, at worst, some nausea or vomiting, as further explained by the NCPC.

There may be one scenario in which poinsettia ingestion is concerning: allergies. If you child has a known allergy to latex, avocados, bananas, kiwis, or chestnuts, then there may be an increased risk of poinsettia allergy, according to the Mayo Clinic. People with these allergies may be at risk for mild eye or skin irritations from the plant, as further noted by the Mayo Clinic. As always, if you suspect your child has a severe allergic reaction to any substance, contact medical help immediately.

Overall, though, medical resources have found the poinsettia plant benign. "There haven't been any deaths reported due to eating poinsettia leaves,” said Michael Wahl, MD, medical director of the Illinois Poison Center, in WebMD. In fact, a 1971 study tested the toxicity level of poinsettias on rats, and concluded that ingesting the plant had basically no effect, according to The Ohio State University College of Food, Agricultural, and Environmental Sciences. In fact, poinsettias are only mildly toxic to domesticated animals such as cats, dogs, birds, horses, and cows, at most resulting in drooling or vomiting, according to the Pet Poison Helpline. Why has poinsettia's toxicity been so greatly exaggerated?

The idea of poinsettia's poisonous nature appears to date back to a rumor that originated almost 100 years ago. In 1920, botanist Joseph Francis Rock published an article in The Hawaiian Forester and Agriculturist claiming that a child died on the island of Kauai after gnawing on fresh-cut poinsettia stems, according to the Museum of Hoaxes. The story, though unverified, was picked up and repeated by physicians and pharmacists in the following years, until the idea that poinsettia equals poison was considered common knowledge.

Although poinsettias may not pose a lot of danger to children, many other holiday plants actually are toxic. Holly berries and mistletoe, for instance, can result in gastrointestinal upset if consumed, according to a 2012 article in The Western Journal of Emergency Medicine. So in general, it's a good idea to keep holiday plants out of the reach of small children. After all, no one wants holiday celebrations cut short by a trip to the emergency room.