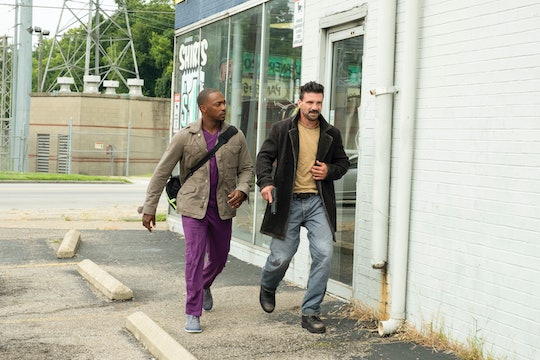 Starring Marvel alumni Anthony Mackie and Frank Grillo, Netflix’s new film, Point Blank, tells the story of a nurse who is forced to help an injured criminal after his pregnant wife is kidnapped. It’s the perfect action movie premise, but if you watch as much Dateline as I do, you may be wondering if it was inspired by real events. So is Point Blank based on a true story?

As it turns out, the movie is a complete work of fiction written by Adam G. Simon, the screenwriter behind the 2015 Shia LeBouf and Gary Oldman war thriller, Man Down. In an interview with KSDK, Simon revealed that Point Blank is loosely based on a 2010 French film of the same name (titled À bout portant in French), pointing out that this new version is a “complete re-imagining” of the movie.

The original French Point Blank was written and directed by French filmmaker Fred Cavayé. When talking to Cinema Without Borders, Cavayé revealed what inspired him to make the film, and why he chose such realistic characters. “What I am interested in is making thrillers with a human dimension,” he explained. “[I wanted] to make it so that the protagonist had no other choice but to immediately move into action mode: he is confronted with the urgency of saving the woman he loves. I wanted to make an interactive film, make it so that the viewer runs with the protagonist, at the same time. I wanted to make an entertaining film, one that gives the viewer a maximum of emotion.”

Movies are rebooted and recycled all the time, and apparently, Cavayé doesn’t mind seeing his film take on a different look. In a 2011 interview with HuffPost, the filmmaker admitted that he was open to seeing a Hollywood version of Point Blank. “It’s unique to see my story told by someone else,” he said. “I’ll be interested to see how it turns out. Here I am, a French filmmaker, whose work is influenced by American films. And I’m being approached to remake my French film by a Hollywood studio. It really brings things full circle.”

While Cavayé’s story took place in France with French characters, the new Netflix version is set in the U.S. and is centered around Paul (Anthony Mackie), an ER nurse who is attacked and left unconscious in his home when his wife is kidnapped. When he wakes up, a mysterious caller tells Paul that his wife is being held hostage, and that he must go to the hospital to help an injured patient get out. The patient turns out to be Abe (Frank Grillo), a gritty criminal who is caught up in a war between rival gangs and corrupt cops. Together, they try to find Paul’s wife, and take down the people who orchestrated this whole mess.

So, if Point Blank feels like it could have been inspired by a true crime story, that’s because it was written that way. And with the film’s intense level of action and violence, I would hope stories like this keep out of the real world and stay on screen.