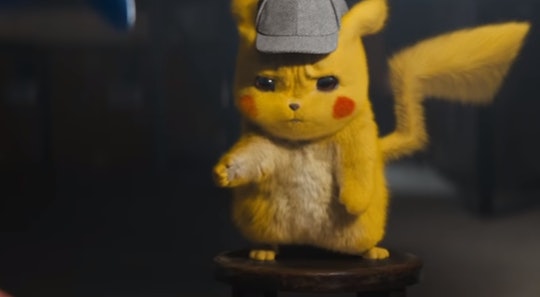 A new movie for families is hitting screens this weekend and as usual, parents of small children have a decision to make. Will this one be OK for your kid? If so, at what age? For instance, is Pokemon Detective Pikachu appropriate for kids under 5 years old? Before you make your plans for the weekend, here's what families can expect when they sit down with the popcorn with this new flick.

In a move that is becoming more common in this age of super-intense action, the MPAA rated Pokemon Detective Pikachu PG for action/peril, some rude and suggestive humor, and thematic elements. That means that for most kids under 5, this one is probably going to be a pass. And PopSugar agrees with the rating, noting in its review of the movie that there are a few scenes that could very well make small children anxious about whether the Pokemon will be OK, in addition to a few jump-scares.

On the flip side of the PG coin, Forbes writer Scott Mendelson argued that a PG rating is a bit of a turn-off for most adults who are going to sit through a kid’s movie. He considers it just a catch-all for movies that are meant for kids that don’t have enough content geared toward older audience members. “It’s a sign that the filmmakers aren’t trying to make this kid-friendly property overly hip, edgy or cool to audiences arguably too old to care about a live-action Pokemon movie,” he wrote.

Does that mean parents will be bored? I don’t think so. The Pokemon story sounds like a creative one that Common Sense Media thinks kids 8 and over will enjoy.

Pokémon Detective Pikachu centers on Tim, the son of a detective who has gone missing. When Tim and Pikachu discover they can talk to one another, they team up to unravel the mystery. According to the film’s IMDb description, along the way they chase clues “together through the neon-lit streets of Ryme City — a sprawling, modern metropolis where humans and Pokemon live side by side in a hyper-realistic live-action world — they encounter a diverse cast of Pokemon characters and uncover a shocking plot that could destroy this peaceful co-existence and threaten the whole Pokemon universe.”

The rating for Pokemon Detective Pikachu was a big mystery for fans for some time because it features Deadpool star Ryan Reynolds as the voice of Pikachu. Known for his tendency toward raunchy humor, fans wondered if filmmakers would use his reputation and go for an R rating or keep it geared toward kids. ComicBook.com reported that in a press release, the film’s distributor called it a miracle to keep things PG, saying: "The R-rated outtakes cut will be worth the wait."

With all this said, only you can decide what your child will enjoy and what they are mature enough to handle. Still, with this movie, it sounds like the odds are pretty good, at least for older children.