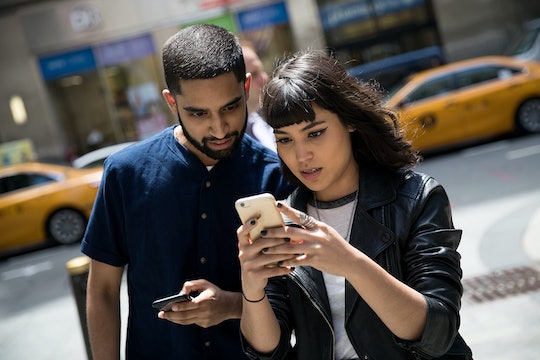 Nintendo's new augmented-reality game, Pokémon GO, was released in the United States Thursday, and, at this point, it's basically all anyone under 30 wants to talk about. A video game that encourages users to go outside, meet their neighbors, and get some exercise sounds like a great idea in theory, but some people are starting to think that Pokémon GO is dangerous (developer Niantic Labs did not immediately respond to a request for comment). According to Jalopnik, a number of car accidents have already resulted from people being distracted by the app. Not only are pedestrians wandering out into traffic while staring at their phones, apparently some players are driving while playing. Aside from the obvious risks of distracted driving, playing Pokémon GO in a moving car means drivers are creeping along at a walking pace and making sudden stops, which makes them look like kidnappers or, at least, really terrible drivers.

Car accidents are the only danger Pokémon GO users need to worry about, either. In addition to chasing digital monsters around, players must also visit PokéStops, which are designated locations that correspond to real places. Some police stations have been labeled as PokéStops, and police have been complaining about teens lurking in the bushes and popping out in the dark. Startling somebody with a gun is not my idea of a fun time.

PokéStops can also draw players to more unsavory areas. In O’Fallon, Missouri, a group of teens exploited their local PokéStop, lying in wait and then robbing players at gunpoint, according to Gizmodo. Even more concerning is the fact that players have the ability to literally lay a trap for others: for a fee, users can place a "lure" near a PokéStop to draw out more Pokémon. Other players collect the Pokémon, too, so they'll be notified when a lure is placed nearby. A Twitter user named Robin posted a warning that when she placed one such lure recently, "all these kids came running out of their homes" to collect Pokémon. Many were unaccompanied by adults, and one spent at least 25 minutes talking to her. It's not hard to imagine what could happen when people are literally able to lure children for a small fee.

Apart from the physical dangers are concerns about digital safety. According to TechCrunch, when users logged in on an iOS device through Google, Pokémon GO was being granted full access to the users' Google accounts, including Gmail, Google docs, and photos. App developer Niantic Labs released a statement on Tuesday claiming that this was accidental, and those permissions were never used. Niantic stated that they are working on a fix so that the app will only access basic Google profile information, but that may not be much comfort to some users.

There is some good news, though; it's possible to play Pokémon GO safely. As far as app permissions go, Android users won't be asked for full Google account access, and iPhone users can either wait until the iOS permission issue is fixed, or sign up for a "Trainer Club" account to use the app without Google. The rest of the dangers can be avoided simply by using common sense: watch where you're walking and driving and always be aware of your surroundings. If the only nearby PokéStop is in an abandoned warehouse with "FREE HUGS" spray-painted on the door, for goodness' sake, don't go inside. And although the risks of "stranger danger" may not be as serious as we once believed, small children should of course always be supervised, and older kids need to be taught how to keep themselves safe around people they don't know. It is possible to play Pokémon GO without being robbed, run over, or kidnapped, so go ahead and catch 'em all, within reason.