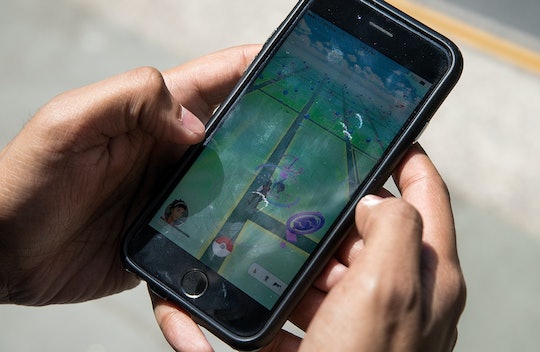 Is Pokemon GO Suitable For All Ages? Here's What Parents Need To Know

Correct me if I'm wrong, but weren't we supposed to be nostalgic about Pokémon? Judging by the trailers for Pokémon GO, the video game has grown up with millennials: the players all look like they're at least college-aged, and the game requires users to walk outdoors and use a smartphone. Does that mean Pokémon is now an older kids' game, or is Pokémon GO suitable for all ages?

The game itself is suitable for kids of all ages — but there's a few things parents should take note of. The game's premise is that a "trainer" (i.e., you, your child, or whoever is playing the game) wanders around looking for wild "pocket monsters" to catch. Since Pokémon GO is an augmented-reality game, you actually have to leave your couch to play: the game relies on real-life maps to overlay Pokémon monsters in areas around your city or town to be discovered. Your kid could find Pikachu hiding behind a neighborhood bush, or Charmander lurking around the Empire State Building.

Trainers also interact with other trainers (okay, okay, they battle one another in the app), which means Pokémon GO players are encouraged to socialize. There are also "PokéStops" that glow pink on the map and are well-known to attract Pokémon (thus attracting real-life Pokémon players aiming to catch those Pokémon).

So, with those basics covered, here's a few things parents of toddlers, tweens, and teens will want to be aware of:

Playing Pokémon GO on a smartphone brings a couple of considerations into play. First of all, if you have clumsy kids, you may not want them playing on your expensive phone the entire day — or dropping it. Another thing to consider is that the app relies on data to work, so kids could rack up excess data bills fairly quickly while chasing Pokémon around the city. Finally, the app itself includes in-app purchases that can range anywhere from 99 cents to $99 (this real-life money will buy PokeCoins to further the game), so block in-app purchases if you don't want your wee one spending all your hard-earned money on virtual monsters.

There's already been reports of people using "PokéStops" for non-Pokémon purposes. Police in O'Fallon, Missouri, reported an incident where thieves lured people in by baiting them with "PokéStops." Instead of catching Pokémon, people found themselves robbed.

The majority of the time, Pokémon GO is probably a healthier app for your children than any video games that keep them glued to your couch. Either way, though, make sure older kids know of possible dangers, and make sure they don't simply walk along with their eyes glued to their devices. If your kids are younger, parental supervision is definitely encouraged (as it is with all outdoor play for young children).

Another potential danger? Make sure your kid doesn't spend his or her entire time staring at a smartphone screen while wandering. Teach your children to be alert, so they can spot people in their path, cars headed their way, and objects that could trip them.

The App Collects Your Data

Cue a whole bunch of frustration from anyone who cares about online privacy (i.e., most parents). According to Engadget, if you sign up using your Google account, you're basically handing over full access to your entire Google account. Both Google and The Pokémon Company said this was a mistake that they're working to fix — but even after it's remedied, the app will be able to collect basic information on you (essentially your name and email address). Make sure you check permissions while signing up or create an alias for Pokémon GO purposes if you're averse to sharing that information.

For parents who are looking to get some extra steps on their Fitbits anyway or don't mind having their children run around the neighborhood with friends, Pokémon GO shouldn't be a problem. If you make sure to cover a few safety basics and supervise your kids when they want to wander further, it can be a fun game for all ages.