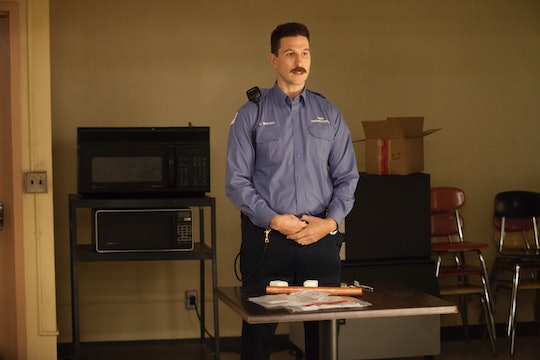 Pornstache Could Make A Comeback In 'OITNB' Season 5

As the Orange in the Black series progresses, viewers always gain and lose favorite characters. Not that I particularly liked the guy, but it's only natural to wonder if Pornstache is in Orange is the New Black Season 5. Last we saw him, he was talking to his mother from prison, still thinking that he was the father of Daya's baby and saying that the idea of Daya and his supposed daughter, Annamaria, were the only thing that kept him going while incarcerated.

According to IMBD, Pablo Schreiber, the actor who plays Pornstache (or George Mendez, if you will), is going to be in one episode of the fifth season. He'll allegedly be in Episode 8, which is called "Tied to the Traintracks." This was one of the episodes that was leaked earlier this spring, so we also know that that episode features Daya — you know, how each episode has a focal character to tell the larger story. So it makes sense that we'd get to see what Pornstache is up to in her episode.

It's sort of odd that it's not until later that fans will get to catch up with Daya. Last time we saw her, she was holding a gun to Thomas Humphrey's head. Season 5 will pick up right in that tense moment, so who knows what will happen to her afterwards. Additionally, Season 5 only spans three days, so it'll be interesting to see how that type of time frame will move the overall story along.

It's not clear how long Schreiber's character was supposed to be incarcerated for, but we do know that Pornstache is completely delusional when it comes to Daya and her baby. Despite his mother telling him repeatedly that the child isn't his in Season 3, he just won't listen. He also actually believed that Daya reciprocated his "love" for her.

If he somehow got out of prison between the last time we saw him and these three days of Season 5, it's possible he could come and visit her — or worse, make a play for the baby, who's in foster care. When it comes to Pornstache, nothing is off the table. Schreiber once told Vulture that he was surprised by the reaction to the character from fans. There are people out there who actually like the guy.

Schreiber said of his character:

Obviously... he is gross. He also can be hysterically funny because of his lack of self-awareness. So there’s been this split reaction of people who absolutely hate my character with a passion and want him to die, and this really strange contingent of people who seem to be titillated by him.

He's a complicated man. Either way, if you love Pablo Schreiber, you can catch him in the new Starz series American Gods, where he's no longer a creepy corrections officer, but rather a giant leprechaun (yes, really). And a badass one to boot. Schreiber's obviously a versatile actor, but he'll always be Pornstache to OITNB fans.