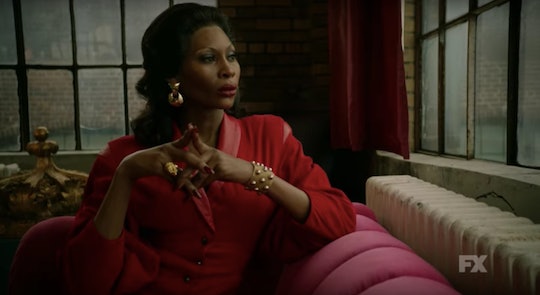 Is 'Pose' Based On A True Story?

Trailers for the upcoming FX series Pose could easily be mistaken for a documentary: the cinéma vérité style of its promos perfectly captures the late 1980s, the decade in which the show is set. It almost seems like a time capsule. But does that realism extend to the narrative? Is Pose based on a true story?

Many aspects of the show are fictionalized, but the setting is very real. While every character isn't directly copied from a real person, the vibrant subculture depicted in the show is one that absolutely did exist in New York City in the 80s, and it has left a lasting impact on pop culture today. Pose is about gay and trans youth who, after leaving their homes or being forced to leave, found a way to create their own families in the big city. They banded together to form "houses" and then competed in balls, where fashion and dance were combined to create something new and unique. Participants would walk the runway in incredible looks, earning prizes and accolades along the way.

Ball culture spawned voguing, RuPaul's Drag Race, and all kinds of drag terminology you might find yourself using in day to day life without knowing exactly where it came from. So Pose is based on reality even if many aspects of it are fictionalized as well.

But ball culture isn't the only sect of the city getting a spotlight in Pose. According to The Hollywood Reporter, the series "looks at the juxtaposition of several segments of life and society in 1980s New York: the rise of the luxury Trump-era universe, the downtown social and literary scene, and the ball culture world." It will begin in 1987 and end with the release of Madonna's "Vogue" in 1990, which brought the community to the mainstream.

Those looking for some insight into the real thing ahead of Pose's June 3 premiere can check out the 1990 documentary Paris Is Burning. It showcases the real people who built the scene, and is available for streaming on Netflix. Ryan Murphy spoke about always being a fan of the documentary during the Television Critics Association winter press tour, and he'd thought of making it into a series before. However, it wasn't until reading Steven Canals' script for Pose that a similar idea became a reality.

It was also personal for Canals. Though he might not have taken part specifically in the scene, he did grow up in New York in the 80s as a gay person of color without access to money or privilege. And he became dedicated to telling his story and the stories of those like him. As he said in an essay for The Daily Beast, "We all have our own stories to tell, and they deserve to be told. Pose is the story that my younger self deserved but never received. I realize now, that it is not impossible for someone like me — a cisgender Afro-Latinx queer man from the Bronx — to tell this story — our story."

Janet Mock, who is both a writer and producer on the show, also discussed the importance of Paris Is Burning when it came to crafting Pose. TV Guide reported her saying:

I knew [the ballroom scene] in the sense of how black and brown trans and queer folk gathered in community and performance and gathered to take care of one another in a world that doesn't take care of them, but I don't think I saw footage of it until I saw Paris Is Burning. So there's no way to separate my exposure to this space beyond that.

Several real life figures from the documentary will appear in Pose as well, including voguing legend Jose Gutierez Xtravaganza and Freddie Pendavis. The protagonists of the FX series might be characters created solely for the show, but it's clear that real people had a huge influence on the series from start to finish. While Pose may mix fact with fiction while telling its specific story, there is a lot of truth to the world it's diving into.