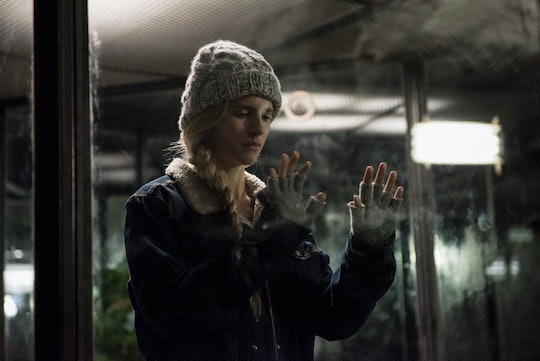 Is Prairie Dead On 'The OA'? The Season 1 Finale Leaves Her Fate Unclear

(Warning: this post contains spoilers from The OA Episode 8.) If you binge watched Netflix's new series, The OA, you're probably feeling a bit confused. Don't worry, so am I. Throughout the series fans saw Prairie die and come back to life a few times, but in the final episode it looked she may have actually died for real. So is Prairie dead on The OA? Honestly, it's hard to know for sure.

In the Season 1 finale, Prairie, along with the five friends she'd enlisted to help her, were caught in the abandoned house they used to meet. In order to prove to everyone that Prairie was actually telling the truth and she was just trying to help them, French and Steve got to work looking for proof that her story was real. Although they were able to find a YouTube video of Prairie playing her violin in a NYC train station, what French found under Prairie's bed seemed to negate everything she'd ever told them.

Prairie had bought various books from Amazon, including The Iliad by Homer, a book about angels, and another about near death experiences. Putting two and two together, French realized Prairie had made up her whole story about Homer and the movements and the other dimension. Except, did she?

After French's realization, everyone went back to their regular lives and basically forgot about Prairie and what she taught them. However, towards the end of the episode, Prairie had another dream/vision and realized what was going to happen. At the school where all her friends were, a shooter came, but together using the five movements Prairie taught them, the group of five were able to distract the shooter, long enough for him to be tackled. However, the shooter was able to get one shot off and hit Prairie who was standing outside also doing the movements.

Prairie was taken away in an ambulance and then fans saw her seemingly wake up in an all white room and say, "Homer," before the episode ended. This seems to indicate she is dead now and is in heaven or wherever it is one goes in this fictionalized world when one dies. However, it's also possible that she just went to the other dimension where Homer and the others went, which was her whole goal in the first place. Although could it be possible that the other dimension was always just the afterlife? Seriously, what does this all mean?

Unfortunately I have no idea. I'll just have to wait until Season 2 (if it gets renewed) to get more answers.