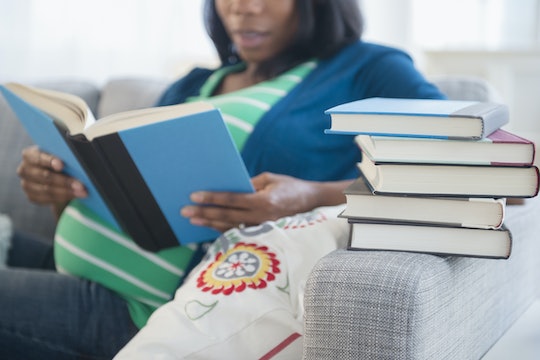 Is "Pregnancy Brain" Real? Turns Out There's A Reason For The Fog

Many women who've been pregnant before swear they've suffered from "pregnancy brain" or "momnesia." The "condition" is likened to walking into a room and forgetting why you're there in the first place, or not being able to find your keys. It's not as if these women are losing their intelligence or ability to function, they just claim to experience minor lapses in memory. But is pregnancy brain real and scientifically proven, or a total myth?

I personally can attest to having muddied marbles while pregnant. I placed milk in the cupboard, forgot doctor's appointments, and accidentally killed a person in a new report for the local television news station (I reported that a man died in a car wreck, who didn't. Talk about remorse and humiliation). I was baffled by my own snafu and had no explanation other than pregnancy brain. Was I losing my mind or did I have a case of "baby brain?" Was this child hijacking my body and by brain? Well, kind of ,says science.

According to Web MD, pregnancy does not change the capacity of a woman's brain.You don't become less smart or less capable, even though you may feel like it. There are, however, a few factors that make a pregnant woman's brain temporarily less sharp than usual. One factor is the huge surge in the hormone progesterone, especially during those early months of pregnancy. In an interview with Time, neuropsychiatrist Dr. Louanne Brizendine said progesterone is like a potent sedative. And since a pregnant woman's levels are 30 to 40 times higher than that of a non-pregnant woman, it can be assumed that a pregnant woman is very sleepy and not as sharp. Again, important to distinguish sleepy and less alert versus incapable or losing IQ. High levels of progesterone will not make a person automatically dumb.

Another reason for a little bit of fog in the dome could be lack of sleep and just plain old fatigue. Pregnant women are tired. They're making a human being, which is a lot of work. Their sleep might not be so good or restorative because of possible aches and pains (or baby ninja kicks on the bladder). According to What To Expect, when a pregnant woman's ability to focus is impaired a bit when she is tired and lacking energy. This means a little forgetfulness is bound to happen and is completely normal.

The other possible case for the existence of baby brain is simply that fact that something's gotta give. When you add another human being in your life and make space for them, something else in your life will inevitably fall back a bit as you adjust to making room in your home, heart, and brain. The same Web MD article explained that with the existence of a baby in your life, your attention and priorities are shifting. What mattered and was important to you a few months ago pre pregnancy might not carry the same weight anymore and has possibly faded into the back of your brain rather than the front. After all, we can't care about everything equally. We have to prioritize and pregnancy brain is the way we figure it out and adjust to our new lives as parents.

The good news is that the haze that sometimes plagues pregnancy is only temporary. The same What To Expect page noted that pregnancy brain generally leaves a few months after delivery. And no one's saying you can't drive a car or perform at your same stellar professional level. You got this. It may be frustrating, but it's fleeting. Plus, if you need a little extra help getting through the fog your smart phone with all of it's fancy bells, whistles, and alerts can remind you of virtually everything.