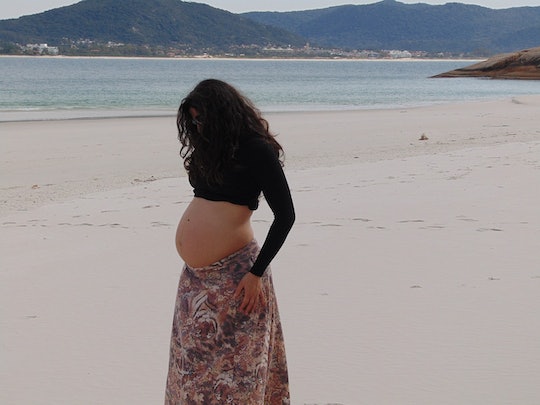 Is Pregnancy *Really* A Pre-Existing Condition?

Unless you've been (wisely) avoiding the news headlines this past week, you're aware of a little thing called the American Health Care Act. Penned as the Republican plan to repeal and replace the Affordable Care Act, the AHCA quickly, and narrowly, passed through the United States House of Representatives last Thursday, and is now up for debate in the Senate. If passed as is, the new legislation could do away with ACA mandates regarding pre-existing conditions. Basically, the AHCA would give states the right to charge people more for their health insurance if they have a pre-existing condition. But, is pregnancy really one of those pre-existing conditions?

Before President Obama passed the ACA, or "Obamacare" as it's more commonly known, insurance companies were allowed to deny coverage to people if they were deemed to have a pre-existing condition — a health issue that would require more doctor visits, and therefore, more money for the insurance company to shell out. Prior to the ACA's implementation, such pre-existing conditions included AIDS/HIV, cancer, transsexualism, and yes, pregnancy, among others.

And while it's unfortunately true that treating cancer and other serious illnesses is an exorbitantly expensive endeavor, should someone really be punished and forced to pay so much more for something that's beyond their control? More specifically, should women be forced to label their pregnancy as a "pre-existing condition?" As though something that could very well be the best thing that happened to them is somehow akin to a life-threatening disease? That it therefore makes them a liability?

Of course, not every pregnancy is one that is wanted, and that's an important distinction. But, hypothetically, under the AHCA, a pregnant woman who wants to keep her baby could be forced to pay upwards of "$17,000 per year for coverage," according to Dr. Leah Kaufman, legislative chair for District II of the American Congress of Obstetricians and Gynecologists. What's even more worrisome about the AHCA's treatment of women is that defining pregnancy as a pre-existing condition is a logistical nightmare.

Let's say a woman who is not pregnant and has no plans to get pregnant signs up for a new health insurance plan under the AHCA. What happens when, a few months later, she unexpectedly becomes pregnant? Could her insurance company claim her pregnancy as a "pre-existing condition," because well, she's a woman and having babies is a woman's sole purpose? Will she be forced to pay higher premiums and out-of-pocket costs then? At the moment, all of that appears to be up in the air.

The AHCA could also charge more for women who have already given birth, meaning that even a woman who has gone through menopause could pay more for her health insurance, solely because she was pregnant in the past.

The Republican Health Care bill disregards women, and makes it possible for insurers to dig into the pockets of women who are pregnant, have been pregnant, or will ever be pregnant. Pregnancy is not a pre-existing condition, except to the Republicans who passed the AHCA, many of whom have completely discounted the value of the American woman.

More Like This
Chrissy Teigen Gives a Cheeky Behind The Scenes Peek Into Her Pregnancy Glam Squad
Can You Have Sex With Placenta Previa? Experts Explain
100 Pregnancy Milestone Instagram Captions For Every Memorable Moment
Here's Why You Should Avoid Oral Sex If You Have Placenta Previa