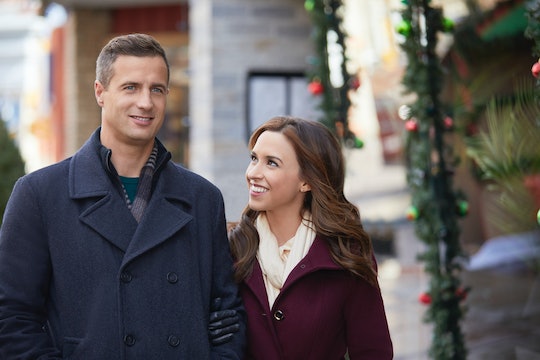 It’s pretty easy to get into the holiday spirit when you have Hallmark’s holiday movies to cozy up to. The network’s latest addition, Pride, Prejudice and Mistletoe, has a title reminiscent of Jane Austen, so naturally, viewers are wondering: Is Pride, Prejudice, and Mistletoe based on Pride and Prejudice? The film is actually based on a book by New York Times best-selling author Melissa de la Cruz, who wrote the book with inspiration from Austen.

According to Hallmark, the film is based on De La Cruz’s 2017 novel, Pride, Prejudice, and Mistletoe. In an interview with No Apology Book Reviews, De La Cruz revealed that she was inspired by Austen’s novel and hoped to tell it in a more modern way with a Christmas twist. “I have always been a fan of Pride & Prejudice. I found it sad that the original female lead, Lizzie, did not have many options,” said De La Cruz. “At that time a woman was very dependent on a man’s affections. As a girl growing up in the 20th Century I found it shocking and decided to turn Lizzie into a strong female character with the world at her feet. I found it very intriguing to switch the roles.”

The author told the outlet that she felt compelled to switch the gender roles in the story and make it about a small town man who falls in love with a wealthy and successful woman. “The person with limited options in my story is Luke, the male lead, and a hometown boy,” she explained. “He is satisfied with his life unlike Lizzie in the original story. He is the one with the embarrassing family whose brothers are juvenile delinquents.” She also revealed that she added the element of Christmas to the story because she wanted to show how important family and friends around the holidays.

Both De La Cruz’s novel and the new Hallmark film follow the story of Darcy Fitzwilliam (Lacey Chabert), a financial adviser who takes time away from her busy professional life to go home and spend time with her family. While helping her mother prepare for a Christmas gala, she bumps into her former high school debate club nemesis, Luke Bennett (Brendan Penny), who has been helping her mom with the event planning. While Darcy helps Luke prepare for the gala, she runs into her old boyfriend, Carl (Morgan David Jones), who begins attempting to win her back. Darcy develops a connection with Luke, and starts reevaluating her life with Carl, but in the meantime people at her firm are trying to steal her clients. Darcy is then faced with the decision of diving back into her professional life, pursuing the spark she has with Luke, or rekindling the relationship she once shared with Carl.

Pride, Prejudice, and Mistletoe might be inspired by Austen’s 1813 classic, but with its twist on gender roles and Christmas feel, the movie may just go on to become a modern holiday classic in its own right.

Pride, Prejudice, and Mistletoe premieres on Friday, Nov. 23 at 8 p.m. ET on The Hallmark Channel.