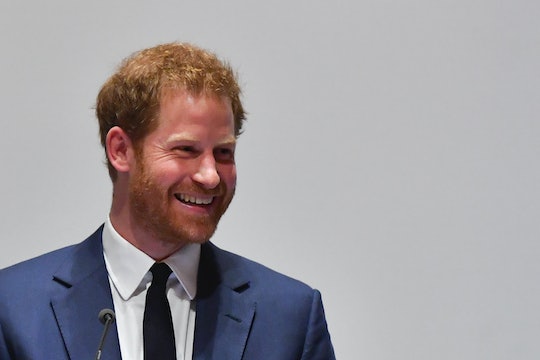 The Olympic Games draw a large audience with celebs and royals alike flocking to the stands to see the best athletes compete. Members of royal families from countries across the globe are set to attend the 2018 Olympics in PyeongChang. But not all royals are attending. For example, Prince Harry reportedly isn't going to the Winter Olympics, and it doesn't look like the other popular figures from Kensington Palace will be there either.

Royal Central recently released a full list of international royalty who will be in attendance at the games, and Prince Harry and fiancé Meghan Markle were not on it. Instead, it looks like Anne, Princess Royal will be representing the British Royal Family at the Olympic Games. Anne is the second child and only daughter of Queen Elizabeth II and Prince Philip, Duke of Edinburgh. She reportedly arrived in PyeongChang on Feb. 4 to attend the International Olympic Committee meetings and will stay through Feb. 13, according to Royal Central.

Aside from her royal lineage, there is another reason why the Princess Royal is the perfect choice to attend the games. She is also a former Olympian and a member of the IOC. Anne was the first member of the Royal Family to compete in the games when she rode Goodwill, the Queen's horse, in the three-day long equestrian event in the 1976 Montreal Olympic Games.

Prince Harry's absence from the games shouldn't be interpreted as a lack of enthusiasm. Both he and Prince William were very involved when London hosted the 2012 Summer Olympics. During an interview with the BBC prior to the games, Prince Harry commented on his country hosting the Olympics and the impact that they have on children:

This Olympics more than any other I think is huge inspirationally for the next generation and the generations beyond as well ... The Games should be a chance to get people out and for ourselves trying to encourage children to do the whole sporting activity thing rather than sitting in front of the TV and playing computer games is hugely important.

The power of sport and competition is something that Harry seems to feel passionately about. He put that passion into action in 2008, when he created the Invictus Games for wounded, injured, and sick armed servicemen and women after serving in Afghanistan in 2008.

Prince Harry went on to explain how these games, like the Olympics, can have an impact on children:

I hope you are ready to see the role models in action that any parent would want their children to look up to. And I hope you’re ready to see lives changing in front of your eyes.

The same spirit of teamwork, courage, and determination is present at the Olympics as well, and is not likely something he would miss out of lack of interest. There are a number of reasons why Prince Harry may be missing the Olympics this year, not least of which is the preparation for his upcoming wedding with Markle. The couple is reportedly planning the wedding themselves, the details of which would likely fill a lot of their time in the coming months.

Additionally, Prince Harry and Markle plan to spend Valentine's Day in Edinburgh fulfilling social engagements, as TIME reported, which would require them to be pretty far away from PyeongChang. But if only one member of the royal family is going to make it to the Olympics this year, it seems right that it would be a former competitor.