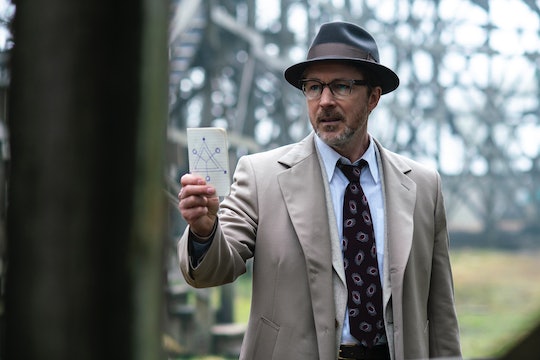 The History Channel has a new offering that’s perfect for fans of the unknown. Project Blue Book isn’t what you’d call science fiction. It’s about actual sightings of unidentified flying objects, both those that can be explained away and those that cannot. Considering the network and the subject matter, it’s safe to assume that this is factual material being presented. Those wondering is Project Blue Book based on a true story can rest assured that despite this being a scripted show featuring current actors, most of what you see comes from actual events.

Project Blue Book was a government study conducted between 1947 and 1969. According to a U.S. Air Force fact sheet, the project was based in Ohio, and there were just over 700 objects that remained “unidentified” at the time of its conclusion. The goal of the project was to discover whether these flying ships were a threat to U.S. national security, and the final conclusion from the University of Colorado is that they were not.

While the facts of the source material are to be referenced, chances are much of the drama seen on screen will be at least somewhat fabricated (and certainly out of order, shuffled around in order to create cinematic timing and intriguing plots that the viewer can follow). See what I mean by checking out the trailer:

As you can see, they really like to use the term “flying saucer,” which was the commonly used description prior to this study, when the now more accepted “UFO” was created. The overall plot seen here is that the government wants to disprove that these objects are from other planets or galaxies, while Josef Allen Hynek, the bespeckled intellectual protagonist, is committed to the truth, and given that the real man upon which this is based was a ufologist (yes, that’s the technical term), it’s safe to say that he believes that other life exists.

This role is a very different one for Aidan Gillen, who most know as Petyr Baelish, or Littlefinger, on Game of Thrones. Gillen told The Hollywood Reporter that Hynek was “a very logical person,” — not simply a believer in extraterrestrial life, but someone who asked a lot of questions and weighed every possible angle. “He wasn't single-minded or persuaded by any one argument, and the fact that he was doing that while working within a government agency is quite fascinating,” said Gillen.

The 10-episode series, in which Hynek will likely come face-to-face with challenges at every turn, is likely to draw comparisons the The X-Files, a popular fictional series within which strange, unexplainable things occur, many of which were at least partially taken from the actual Project Blue Book. However, this series is entirely based on real case files, and Hynek’s own sons were consults (Hynek himself passed away in the 1980s). So if you’re looking for a period piece with actual UFO sightings and the correct terminology, you’re definitely going to want to check out Project Blue Book.