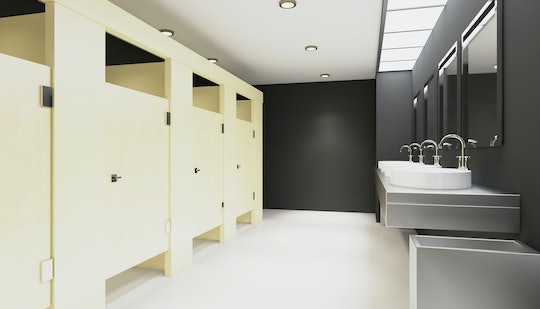 No, You Can't Be Forced To Pump In A Bathroom, & Here's Why

When I was nursing my daughter, I was in graduate school. I was going back and forth from classes all the while trying to keep up with my field work and lab requirements. It was stressful to say the least. To further complicate matters, I was forced to occasionally find someplace to pump during the course of my day and the circumstances weren't always ideal. Most of the time I got to pump in a beloved professor's office, but a few times, I was in the bathroom. Is pumping in a bathroom sanitary though?

The process of pumping can be involved and messy at times. You require, at the very least, a place to sit (or lean) and a stable surface for your pump with room to maneuver enough to put lids on bottles and attach and detach the pump. It's nearly impossible to accomplish in a bathroom, but many women have done just that while leaning over a sink or sitting on the toilet. However, while there are certainly some germ-filled locations where you might find yourself pumping, few places will have the range of E.coli and other bacteria commonly found in the public restroom, found The American Society for Microbiology.

I spoke with mother and research biologist Doctor Diana P. Bratu of Hunter College and The Graduate Center at the City University of New York, and she tells Romper, "I was fortunate to have an office and pump in private in a clean environment." Going on to answer very simply, "No, I do not think it is sanitary to pump in a public restroom." If you find yourself having to pump in a bathroom, wash your hands frequently, and try not to touch any surfaces while pumping or pouring.

It should be noted that employers cannot designate a bathroom as a "suitable pumping room" as per the United States Department of Labor. They specifically note in the law, enacted as a part of the Affordable Care Act, that "Section 7 of the FLSA requires employers to provide reasonable break time for an employee to express breast milk for her nursing child for one year after the child's birth each time such employee has need to express the milk. Employers are also required to provide a place, other than a bathroom, that is shielded from view and free from intrusion from coworkers and the public, which may be used by an employee to express breast milk."

That doesn't mean they're going to give you a great space to nurse, often it's just the opposite. In fact, working women everywhere have been posting the terrible places they've been forced to pump. And, unfortunately, students don't have the same protections, and most public places don't have mother's rooms to pump in, so you're forced to do it out in the open (if legally allowed) or in the ladies' room. It's not fun, and it makes you wonder — is it sanitary to pump in a public bathroom? Because, let's be honest, between urine, feces, vomit, period blood, and everything else that might happen in the bathroom, it's got to be teeming with bacteria, right?

As it turns out, it is. according to a study in BMC, they found that "microbes on restroom surfaces were similar to those found on specific human body parts, with the strongest association observed between toilet surfaces and gut and vaginal communities. These associations are to be expected given the direct contact common in this environment between surfaces and the human body." Some of these bacteria, like E.coli, streptococcus, and staphylococcus, are highly contagious and highly dangerous to developing immune systems like that of babies. The study wrote, "the unique microbial assemblages detected on different human body parts can be transferred to indoor surfaces following contact, and that these bacterial traces of human contact are evident in places such as restrooms." Meaning, just touching the surfaces puts you at risk, and when you touch the pump and its parts, as well as your nipple, you're at risk for contamination.

If someone tries to force you into a bathroom to pump or breastfeed, you should know your rights. 49 states (Idaho is the only one not included) have laws that specifically give you the right to breastfeed in any public or private place. You do not have to breastfeed or pump in a bathroom and you absolutely should not be forced to. It doesn't matter if it's the cleanest bathroom in the world or not — you have rights.