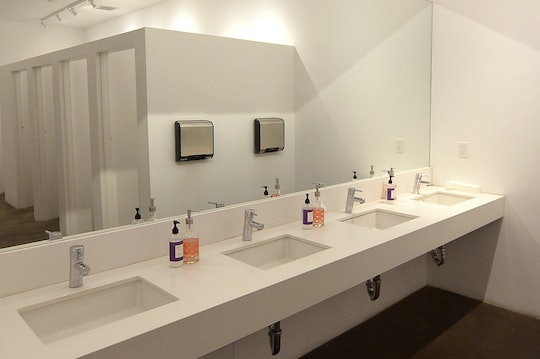 Actually, Pumping In A Public Restroom May Not Be As Dangerous As You Think

Although it's a totally natural function of the human body, expressing breastmilk in public spaces can be a tricky task. When you're miles from a home or a vehicle, options for privacy in public can be slim. In some cases, a public restroom may be your only option, but is that a good idea? Actually, pumping in a public restroom isn't as dangerous as you think. A pristine, sanitary, and readily available lactation room would be ideal, of course, but that just isn't always the case. Sometimes you have to make do with whatever resources are available.

If you're in a situation where pumping in the bathroom is the best option available, then don't despair. Bathroom pumping is the reality for plenty of moms. "Many moms have access to pump rooms that make things a little easier at work, but some don’t and still have to pump in a bathroom stall," said Nuala Murphy, RN, IBCLC with Texas Health Presbyterian Hospital, to Texas Health Resources. "If there isn’t a clean place to wash and dry your pump parts, use pump cleaning wipes, try to keep things as clean as possible, and wash your hands. It’s about as good as you can do." In general, it looks like judiciously using sanitizing wipes and trying not to touch anything in the bathroom is your best practice. If the public bathroom pumping is just something that happens on occasion, you will most likely be OK.

Just how dangerous are public bathrooms in terms of sanitization, anyway? They might be less terrible than you think. "The restroom isn't that dangerous," said Jack Gilbert, a microbiologist at Argonne National Laboratory in Illinois to Live Science. "The organisms which can grow there have a very low probability of being able to cause an infection." OK, so a healthy adult doesn't have much to fear from the loo. What about a breastfeeding kid, though?

While I could not locate any studies that directly examine the hazards of pumping breast milk in an unsanitary area, there is a lot of research supporting the general healthful benefits of breast milk. Because breast milk provides nutritional and immunological benefits, breastfeeding even in an area of widespread pollution is still recommended, according to a 2008 study in Environmental Health Perspectives. It's worth noting that the scope of this study was a little different and did not focus on the public restroom question directly. Still, it's worth considering the many benefits of breastmilk and pumping, even if you have to do so under less than perfect conditions.

There's also a lot to be said for trusting your judgement when it comes to bathroom sanitation. I mean, the bathroom of a fancy hotel lobby that gets cleaned after every use is going to be very different from a port-o-potty three days into Coachella. If you walk in a stall and it's a total disaster area, then this may be the time you give pumping in public a try. Hey, you're trying to produce food for a person, after all, so it's cool if you demand a certain level of cleanliness and comfort.

In addition, it's totally understandable if you just don't want to pump in a public bathroom stall at all. Thankfully, safe and private nursing spaces can be found in some areas. For instance, there's a shoe repair shop on my block that has a large sign welcoming breastfeeding moms inside, so you might be able to find a similar space in your nearby area. There are even online resources such as Moms Pump Here that will help you find sanitary nursing spaces when you're out and about. Plenty of areas, from dressing rooms in retail stores to university medical centers, offer dedicated lactation rooms. Sometimes it helps to think outside the restroom if you need a bit of privacy in public.

There is at least one scenario in which you should not have to regularly pump in a bathroom, and that is at your workplace. At your job, you must be provided with private space other than a bathroom for pumping breastmilk, according to the United States Department of Labor. It's a federal law.

But if you happen to get caught in traffic or find that errand-running is taking much longer than expected, then the occasional public bathroom pump is not necessarily the end of the world. Just do your best to keep everything contained and wipe up judiciously afterward with some sanitizer.

More Like This
Parents Have Thoughts After Court Orders Nursing Mom To Use Bottle In Custody Dispute
Chrissy Teigen Nodding Off While Breastfeeding As Miles Chats Away Is Too Relatable
When Does A Baby Recognize Their Father? A Pediatrician Explains
The Best Dressed Parents At The 2023 Grammy Awards
What Parents Are Talking About — Delivered Straight To Your Inbox