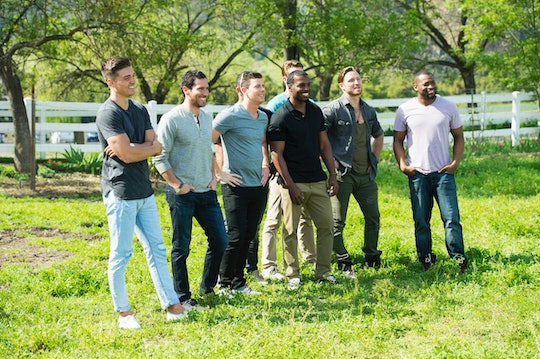 'The Bachelorette' Had Some Surprise Guests

As one can expect, Rachel is a pretty popular Bachelorette. She's intelligent and charming — oh, and beautiful, so what's not to love? In the premiere, Rachel was visited by contestants from her Bachelor season; on Monday's episode, other famous friends paid a visit... and they were a tad more famous than Corinne (if you can believe it). For the first group date and challenge, actors — and power couple — Ashton Kutcher and Mila Kunis paid a visit to lay down the rules. Is The Bachelorette's Rachel friends with Ashton Kutcher and Mila Kunis? The A-list husband and wife pair surprised the contestants.

Celebrities, they're just like us: fans of The Bachelorette. As it turns out, Kutcher and Kunis watch the franchise every Monday — with Kunis having white wine and Kutcher having a cocktail, of course. They love the show and Rachel in particular so much that when they found out she was the Bachelorette, they called the producers to see if they can appear on the show. According to a Reddit AMA Kunis did in 2015, they really are fans! When asked about what shows she watched, she said, "I guess the only thing I have to watch is The Bachelor? But that's so depressing... But it's so addictive." Bachelor Nation couldn't agree more.

So, what exactly did Kutcher and Kunis do on the show? They helped her out with the first group date, which was a "Husband Material" challenge. Kutcher, wearing a shirt that said "Trophy Husband," said that the men needed to learn tasks like changing a diaper and cleaning in order to be husband material for Rachel. When Lucas won the challenge, they had a chance to see his "whaboom"... and they weren't impressed. This just further proves how much like us they are.

Are Kutcher and Kunis really friends with Rachel? Well... probably not. They said they called up the producers to appear on the show — they didn't blow up Rachel's phone. They did admit, though, that they did it because they loved her on The Bachelor so much. If Rachel needed to call on her friends, I'd more expect Raven or Jasmine to show up than Kutcher and Kunis. The fact that they were so eager to help her out, though, is awesome. It's also a sign of future guest stars to come this season — so viewers can get excited.