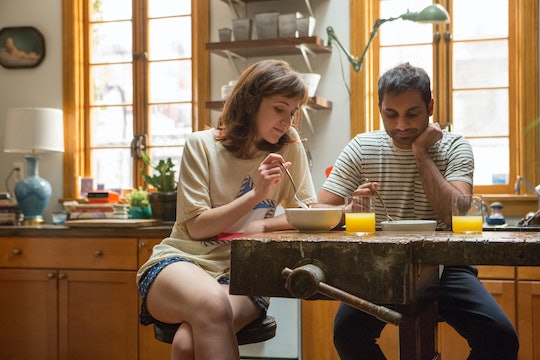 Rachel May Be MIA In 'Master Of None' Season 2

Aziz Ansari's quintessentially millennial rom-com Master of None returns to Netflix this month after scooping up four Emmy nominations and one win in its first season (not to mention a Peabody Award, a Golden Globe nom, and NAACP Image Award and GLAAD Media Award noms). The first season anchors his character's dating life to a woman named Rachel, played by SNL alum Noël Wells, but the pair break up in the season finale, each traveling to different continents to do some soul searching. So fans of the couple may be wondering: is Rachel in Master of None Season 2?

If you were a huge Dev/Rachel 'shipper (or maybe just a big fan of Wells), then it may be bad news. Wells isn't slated to appear in any Season 2 episodes, at least according to IMDB. From the Season 2 trailer, we know that Dev embarks upon dating a slew of new women, much like he did in the first season before meeting and moving in with Rachel. But keeping pace with dozens of low-quality connections seems to take its toll on Dev, who collapses onto his couch following a montage of meeting women in bars. Part of the season is also set in Italy, where Dev ran off to at the end of Season 1 to pursue pasta-making in culinary school (a totally normal move for a millennial working actor paying rent on a ridiculously beautiful New York City apartment).

At least one of Dev's new relationships unfolds in Italy, where he meets a British woman and then promptly has his phone stolen right after he gets her number. Rachel, meanwhile, is in Tokyo, where she moved after the breakup (and a new dye job) to try and make the most out of the remainder of her 20s before settling down. The breakup wasn't especially contentious, but it was definitely sad and painful. Upon realizing that they were only 70-80 percent sure they'd wind up together forever, Rachel and Dev split in pursuit of relationships that are both stable and exciting. Of course, both of them are risk-averse in their own ways, which they hope to address with their continent-hopping relocations.

Unfortunately, it doesn't seem like Dev and Rachel run back into each other when he returns to New York following his trip to Italy. In its way, it's a strong choice for the show not to give a happy ending to a couple just because they were comfortable together. It's actually pretty reminiscent of Hannah and Adam's final moments together from the last season of Girls.

To keep up with where Dev's romantic life turns, tune into Master of None Season 2 on Netflix starting May 12.