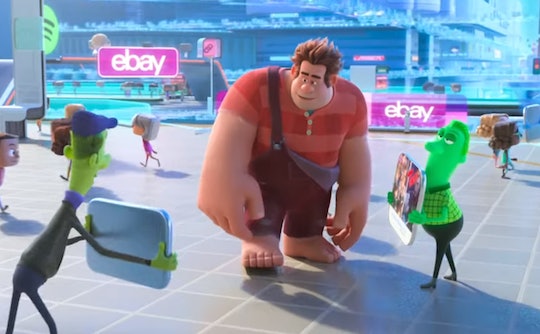 Is 'Ralph Breaks The Internet' OK For Kids Under 5? Here's What You Need To Know

With the weather turning colder, it's the prime season for moviegoing! Taking the whole family out for an afternoon in the cozy theater is one of the most fun activities to do during the holidays, and this year, there’s a new animated feature that everyone is sure to enjoy. But before you make your plans, you may be wondering if Ralph Breaks The Internet is appropriate for kids under 5, or if your little ones would find this film too overwhelming.

Five years old seems to be right about the age that kids will begin to appreciate this film without being too frightened by some of the action and characters. It actually seems to be a little less violent than it’s predecessor,Wreck-It Ralph, which was definitely not for young kids, according to Common Sense Media. Parents on the site rated the 2012 film as appropriate for kids 8 and up, based on aggregated reviews.

One blogger at Cherish 365 was able to attend a pre-screening of Ralph Breaks The Internet and had her 5 and 7-year-old children write their own reviews. Both the kids loved it, and neither thought it contained too much violence, the main criticism of the first film, according to Is This Movie Suitable.

The 5-year-old said, according to Cherish 365, it was one of her favorite movies and thought it had a good message about friendship. “It wasn’t scary, but maybe for three and under I’d think it’s a little scary,” was her assessment. The 7-year-old was a little more jaded in his review, saying the film wasn’t funny, but he did comment that he liked it better than the first film and would like to see it again, according to Cherish 365.

The story of Ralph Breaks The Internet still centers on Ralph and his friend, Vanellope, who have to help fix the broken Sugar Rush game, according to IMDb. When they realize their arcade has internet access, they delve into this exciting, new world to hunt down the things they need. The film’s page said the MPAA has rated it PG for some rude humor.

IGN called Ralph Breaks The Internet a “sweet, funny and worthy follow-up to 2012’s Wreck-It Ralph.” Their review noted that the film is perhaps funniest when it’s commenting on its own studio, Disney, and the many properties it owns like Star Wars, Marvel and a huge lineup of princesses.

USA Today had a slightly different take on things as their review honed in on a touching message about parenting. "The movie speaks to any mom and dad who've weathered conflicting feelings about their kids going to kindergarten, high school, college – and to anyone who has ever been flummoxed by the World Wide Web, which is pretty much everybody."

Overall, Ralph Breaks The Internet sounds like a very fun ride for kids and parents, and it should be a hit this holiday season. Parents of course know their kids best, but for the littlest ones under 5 years old, perhaps sit this one out until they’re better able to appreciate some of the humor about the internet, and can better understand the message about friendship.