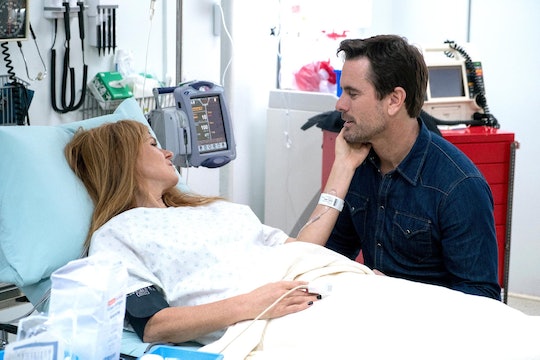 If you're a fan of both This Is Us and Nashville, then odds are this week left you pretty emotionally drained. Because while some deaths you can see coming from a mile away, others take you completely by surprise — which was definitely the case when it came to this week's episode of Nashville. But is Rayna really dead on Nashville? She was able to survive being held at knifepoint by a psychotic stalker and seemed to make it through the car crash OK, but by the end of the hour, our beloved country star left this world (and her devastated family) behind. And I'm sorry to say that there doesn't seem to be any way around that.

It's hard to picture Nashville without Connie Britton in it, mainly because a.) she's one of the main stars, and b.) her talent in all things is irreplaceable. And yet, that's something fans are going to have to learn to deal with, because from here on out, Rayna Jaymes is no more, which is going to be a difficult thing for every character on this show to handle — particularly when it comes to her two daughters and the love of her life, Deacon.

But considering denial is one of the five stages of grieving, I'm sure there are some fans out there hoping against hope that Rayna will somehow find a way to magically return and surprise us all. Well, I'm sad to burst your little enthusiastic bubble, but I'm afraid that theory is nothing but a pipe dream. I say this in large part due to the interview Britton recently had with Entertainment Weekly, where she confirmed Rayna's death and the fact that she'll no longer be on the show, stating:

Let me just say there were a lot of reasons. Some of them were personal and some were creative, and I’m probably not going to get much more detailed than that. There were a lot of things at play, and ultimately it was about making sure the show was in a good place.

It doesn't get much clearer than that. Unfortunately, it seems as though Rayna is gone for good — at least in the present day sense. There's always a chance she could pop up via flashbacks every so often. But as far as her series regular role is concerned, Britton's days on the series are numbered.