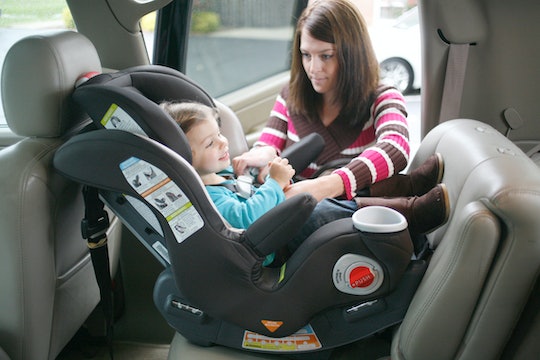 Making your baby face the back of the car seems kind of torturous. Babies don't get any pretty scenery to look at, and you can't see their face, or talk to them, especially if you're in the front seat or driving. For safety reasons, you are required to turn your baby's car seat around in the first few years of their life, but is rear-facing really safer than forward-facing? Surprisingly, there's a lot of science behind it.

According to the Car Seat Lady and general laws of physics, you will always go forward in a frontal crash, and as noted by the National Highway Traffic Safety Administration, almost 60 percent of car crashes are frontal impacts. If you have ever been in a car crash, or have just hit the brakes really hard, you would know that your head is thrown forward with violent force. The Car Seat Lady website explained that because an adult's head is only six percent of their body weight, they are able to withstand forward force to their neck, but a baby's head is about 25 percent of their body weight, which would make their head push forward with four times as much force as an adults. The article noted that because a baby's spine and ligaments are still developing and fragile, a forward force on their neck could lead to paralysis or worse.

Sarah Brown, community safety expert at SafeWise, tells Romper that rear-facing car seats that are specifically designed to support the baby's head, neck, and spine, are the safest way to go.

"You should try to keep your child in a rear-facing car seat until they are 2 years of age or weigh at least 30 pounds. They are simply the safest types of car seats because the shell is designed to offer maximum support to your child and distribute the force of the crash equally," she says. The American Academy of Pediatrics agrees and noted in their car seat guidelines that children should remain rear-facing until they are at least 2 years old, but preferably until they reach the maximum rear-facing height and weight requirements for their car seat.

Even though the view might not be great, rear-facing is really safer than forward-facing, especially with babies under the age of 2. If you're unsure about your car seat installation or what to find out more about car seat safety, you can reach out to your local fire department for information.

More Like This
Can You Help Your Baby’s Hair Grow?
First Look: The New Jujube x Lilo & Stich Collaboration
Here's When Your Baby Might Start Sleeping Through The Night For Real
Baby Not Napping At Day Care? These Reasons May Be Why