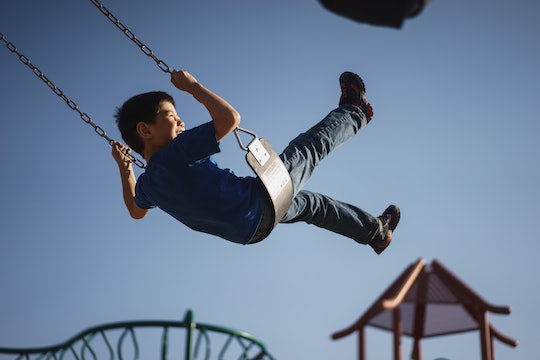 Recess Could Be Made Mandatory In These States

Playtime is getting political. In Florida, lawmakers are currently working to make recess mandatory in schools, begging the question: Wait — it isn't already mandatory? On a national level, no, recess isn't mandatory, but requirements for free time do vary state by state.

Currently, there are 21 states that require recess or physical activity in schools, though the duration, frequency, and nature varies. According to StateOfObesity.org, a project of the Trust for America's Health and the Robert Wood Johnson Foundation, these states include:

As noted, however, recess requirements can easily be lumped in with regimented physical education. Thus, kids aren't necessarily getting the creativity-boosting, social skills-forming periods of release that can be so beneficial.

Florida Senate Bill 78, which was approved this Tuesday, necessitates "a minimum number of minutes of free-play recess per week" and a "minimum number of consecutive minutes of free-play recess per day." According to the Associated Press, the push for 20 minutes of daily free play came from school children's mothers, who've been working towards this goal for a couple of years, under the premise that "children need recess to expend energy and give them a break from schoolwork."

A similar fight is currently underway in Arizona, where lawmakers are instead looking to secure 50 full minutes of recess, not at all combined with physical education. The bill needs one more final round of voting to get through the state House of Representatives, after which it'll go through to the state Senate. Democratic state representative and educator Jesus Rebalcava is advocating for the measure because he believes that "giving students a break during the day will help them focus better when they come back to class." Other supporters also note that recess improves children's physical health.

Arizona and Florida are definitely making leaps into the right direction. A 2013 report by the American Academy of Pediatrics (AAP) found that daily recess is a must in schools, "even though the length of the recess period has not been firmly established." Still, many school officials are resistant to the change, insisting that devoting time to recess will take away time from academics or claiming that schools aren't equipped with the right resources to handle daily recess. The AAP notes, though, that "minimizing or eliminating recess may be counterproductive to academic achievement" based on various findings that "recess promotes not only physical health and social development but also cognitive performance."

Efforts in Florida and Arizona are working to give kids the right to play. Though establishing mandatory recess might seem like more trouble than it's worth, research shows that the benefits are vast, and help create more well-rounded students. Young children spend so much of their time in schools that it's only fair that lawmakers provide the proper resources to make kids' efforts as effective and enjoyable as possible.