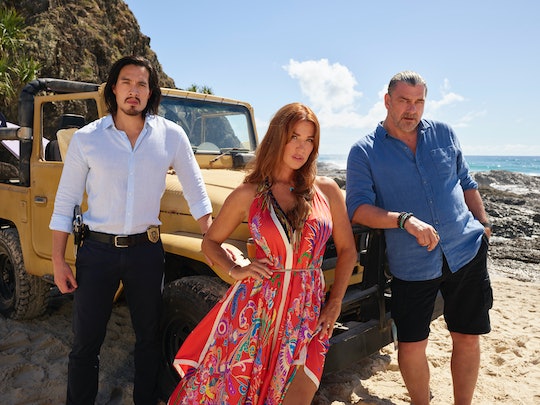 Reef Break, ABC’s new crime drama, is turning out to be one of the hottest shows of the summer. Each week, the show takes viewers to a Pacific Island paradise, where Cat Chambers (Poppy Montgomery), a thief-turned-fixer, uses her criminal insight and experience to catch bad guys in the act. If you haven’t been able to keep up with the show on broadcast or cable TV, and you're wondering if Reef Break is on Hulu, there’s good news.

With a Hulu subscription, you can stream every episode that aired since the season premiere. New episodes come to the Hulu the day after they air on ABC (Thursdays), which means you’ll get a fresh episode to watch every Friday. Just in case you’re looking for more ways to watch, you should know that you can stream Reef Break on ABC’s website and mobile app, as long as you login with your cable provider ID and password.

In an interview with Collider, Montogomery revealed that she created the show with inspiration from crime shows she’s worked on and her love for the beach.

“I wanted to live that beach lifestyle, so I was like, ‘How do I incorporate my job with everything that I really want to do?,’ which was to be on the beach, surf, ride a jet ski, and do a show that was fun, and not super dark,” she explained. “I’ve gotten to the point where I feel like the world is pretty dark and so many weird things are going on, politically, that I wanted to do a show that was fun to act in and fun to watch. It really came about because I have an audience in that genre of procedural shows, so I took the idea to M6 (a TV Studio) in France ‘cause my shows, Without A Trace and Unforgettable were really, really popular there. I was like, 'Hey, I’ve got this idea to do a twist on one of those shows. It’s the Magnum PI and Baywatch meets Hawaii 5-0 version, with a girl surfing and doing what the guys normally do.'”

While Reef Break is a crime drama at heart, it does exude that relaxed beachy tone that Montgomery hoped for, which is probably why it’s turning out to be one of the hottest shows of the summer. Luckily, whether you’re watching through cable TV or streaming, there are plenty of ways to catch the series, so you can take a dip whenever you’re ready.

More Like This
'Workin' Moms' Has An Official Release Date For Its Final Season
Here’s How To Watch Every 'Modern Family' Thanksgiving Episode
'Virgin River' Has Wrapped Filming Season 5 & OMG Is Charmaine Still Pregnant!?
'Wednesday' Creators Say They're "Talking Amongst Ourselves About Season 2