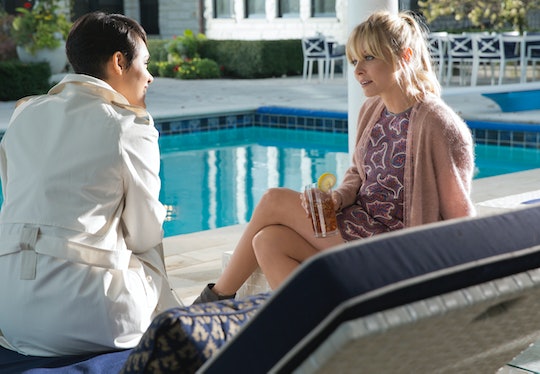 Is Rhonda Dead On 'Empire'? Don't Count Her Out Just Yet

One of the most pressing questions on many fans' minds going into Wednesday's mid-season premiere of Empire is if Rhonda is dead or alive after being pushed down the stairs. At the time of the mid-season finale, Rhonda was heavily pregnant with Andre's son. While the expectant mother was sleeping at home, she was awoken by the security alarm going off. When she went to see what caused the disturbance, Rhonda was violently pushed down the stairs by a mystery assailant. The final shot of the episode — Rhonda lying motionless at the bottom of the stairs — doesn't paint a pretty picture for Rhonda's future.

So, is Rhonda dead on Empire? Or has she managed to survive, somehow, rather than being added to the show's rapidly escalating body count? When it comes to a show like Empire, it's usually safe to assume that the most dramatic option is the probable outcome. We are talking about a show were Lucious shot his best friend and Rhonda killed Uncle Vernon with a candlestick. It's easy to imagine a plot where Rhonda and the baby were killed in the fall, and an emotionally devastated Andre is left to deal with the terrible reality of losing his wife and his unborn child. The alternative possibilities are that Rhonda lives but loses the child, or maybe Rhonda and the child both survive.

A good place to find clues regarding major plot developments is by looking at any juicy tidbits offered up by Empire's showrunner, Ilene Chaiken. Chaiken made an especially revealing comment in an interview with The Hollywood Reporter. "Rhonda and Andre are figuring out whether this was an accident, a cruel twist of fate, whether it was something that God meant to happen or that somebody did to them for some other nefarious reason is going to be a very big story for us," said Chaiken. This implies that Rhonda might survive her accident after all. Even so, Chaiken's remark still leaves the fate of Rhonda and Andre's baby unknown.

The aftermath suggested by the most recently released Empire trailer, however, is the worst-case scenario. Scenes from the preview for the mid-season premiere depict Andre screaming in the hallway of a hospital and then weeping in his unborn child's nursery.

No matter the outcome, it's likely we'll be seeing an emotionally unhinged Andre grappling with the mystery of who attacked his wife and his unborn son when Empire returns. And after Rhonda's chat with Anika prior to her tumble, we know that Rhonda is capable of going HAM on anyone who threatens her. If she survives, you can be sure Rhonda won't take her attempted murder lightly.