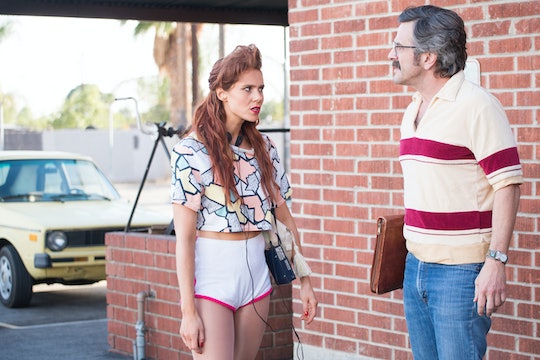 Rhonda From 'GLOW' Will Be Very Memorable

As much as we love Orange is the New Black, I'm a little more excited to check out Jenji Kohan's newest Netflix project, GLOW, which is available for streaming starting June 23. The show is based on the actual wrestling show from the 1980s called the Gorgeous Ladies of Wrestling. But if you're looking for a documentary, think again. From what I can tell, none the characters, including Rhonda from GLOW, are based on real people. But that doesn't mean they aren't complex, interesting, and of course, hilarious. In the Netflix series, Rhonda is a British print model who finds herself in Los Angeles, wrestling with all of the other former actresses and models just trying to keep their entertainment dreams alive.

Rhonda is played by Kate Nash, which is a great fit. Nash, who's from the U.K., is possibly better known for her music, but she's also an actress. She's appeared in Powder Room, Greetings from Tim Buckley, and Syrup. Her role in GLOW, just given Netflix's reach and the likelihood that it's going to be a great success, will likely be her biggest acting gig yet. And who knows? Maybe it will lead to some other headlining roles later on.

The actual Gorgeous Ladies of Wrestling was originally a scripted series, but then evolved into an unscripted syndicated show, and eventually, the crew hit the road for events and parties.

Between the perms and the neon colored tights, the Netflix project is going to be absolutely hilarious. And possibly make you want to find actual clips of the original Gorgeous Ladies of Wrestling. They're out there on YouTube. If you get hooked, you'll notice that a lot of the actual GLOW stars had similar backgrounds to Nash's Rhonda, Betty Gilpin's Debbie, and Alison Brie's Ruth, the latter of which is described as an out-of-work actress, who is struggling to find a way (any way) to make it in the entertainment business. Enter GLOW.

But not all of the women are actresses or models. There are Hollywood party girls, a teenage runaway, a medical student looking for something else, and an actress who's sick of making "guest appearances." Marc Maron plays Sam Sylvia, "a washed-up, B-movie director who now must lead this group of women on the journey to wrestling stardom." His character could be at least somewhat inspired by the actual creator of the Gorgeous Ladies of Wrestling Matt Cimber, a well-known director, though considering Maron's character name is Sam and not Matt, the similarities may be minimal.

So, although the ladies of Netflix's GLOW aren't portraying the actual Gorgeous Ladies of Wrestling, the series creators definitely did their homework and will no doubt succeed in bringing a memorable time in '80s culture to life.