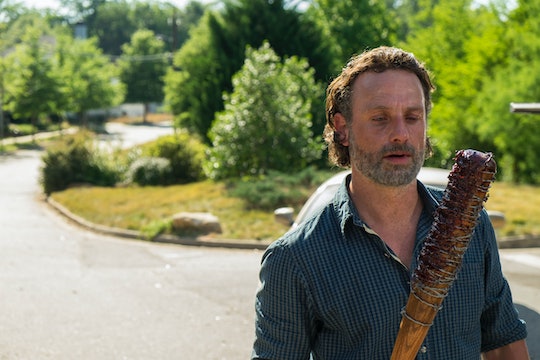 Is Rick Still Alive In 'The Walking Dead' Comics? Season 7 Finds Him At A Low Point

Rick is possibly the lowest he's even been on The Walking Dead. All of the characters on the show have hit their low points throughout the years and had to learn to drag themselves back up, but with the threat of Negan looming, things have become especially bad. Rick in particular has totally abandoned his usual heroics in favor of capitulating to Negan's every whim in an effort to keep his people safe. Though Rick has always seemed to be fairly safe from being killed, he's in the most precarious position he's been in yet. So can the comics assuage any Rick worries you may have? Is Rick still alive in The Walking Dead comics?

Of course he is! Rick is the protagonist of the series and at the end of the day he's still the hero. He's the one taking the audience through this entire post-apocalyptic ordeal and the chances are slim to none that he's going anywhere any time soon. Part of a hero's journey is getting so beaten up that it seems like they might not ever rise up again, but they always do. And the struggle makes the triumph all the more triumphant. However, just because Rick has survived in the comics doesn't mean he hasn't come out of things a little worse for wear.

Rick is able to overthrow Negan eventually in the comics, though he ends up needing the help of the Kingdom and the Hilltop community to do it. Surprisingly, he doesn't kill Negan, though they do each other plenty of harm in their final showdown. Negan breaks Rick's leg and Rick slashes him across the throat, but both men survive the encounter. It's rare for a big fight in The Walking Dead to go without major casualties, but Rick's victory comes without Negan's death; instead Negan is imprisoned in a cell in Alexandria, where he remains for two years until he eventually escapes.

But one of the biggest changes between Rick in the comics and on the show is that in the comics Rick lost a hand during one of many skirmishes with the Governor. The Governor severed Rick's hand to show that he really meant business, and it was one of a few serious hits Rick took that awas physical, not just emotional. It's something many fans have been curious to see on the show for years, though it hasn't yet come to pass.

Rick will likely survive whatever is coming on the show, but don't expect him to do so without a few scrapes. But when you're dealing with a show titled The Walking Dead, that shouldn't come as all that surprising.