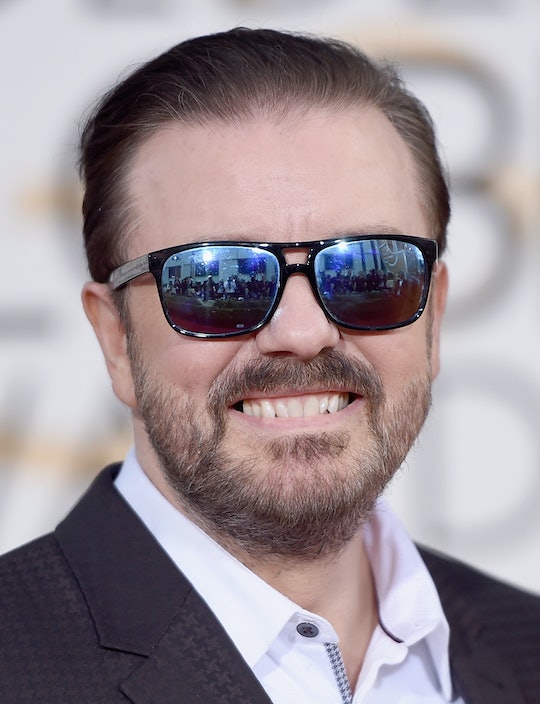 Is Ricky Gervais Drinking At The Golden Globes? His Interview Gave Us Some Clues

As soon as he hit the E! Red Carpet in shades, Ricky Gervais was already joking with Ryan Seacrest about how heavily he was sedated in preparation for hosting duties. But let's be real: Ricky Gervais drinking during the Golden Globes this year is not out of the question. Because uh, well, of course he is. It's pretty much all he was able to talk about as he chatted on the red carpet with Seacrest.

First, they talked about how much he likes to party, with Seacrest pulling up a shot of Gervais splayed out on Will Arnett's lap at a Netflix afterparty in 2015. Then, Gervais' wife joked about his pre-game rituals. When Ryan asked the host what he was looking forward to most, Gervais was quick to answer that he was looking forward to the show being over. That way, he could start treating himself to a "reward," which, in his case, is a stiff drink.

It's a party night, so who can blame him? In fact, the host is known for boozing on stage. In 2011 when he hosted, he joked that it was going to be a night of "heavy drinking," and although no one can confirm there was actually alcohol in the glass he was carrying around, it's safe to assume he had mixed himself a stiff one. Last week, Gervais told Yahoo News that he was ready to top his glass off in between his stints on stage.

Golden Globes viewers are into his habit, though. It might even be the most amusing thing about the night (because JLaw can't trip again, can she?). After his interview with Seacrest, Twitter weighed in:

He may want to slow his roll tonight though. Already, viewers and critics are just waiting for Gervais to say something crass, or worse, straight-up offensive. Earlier on Sunday, he called the Golden Globes audience the C-word in a tweet. Should we just blame it on the day drinking?