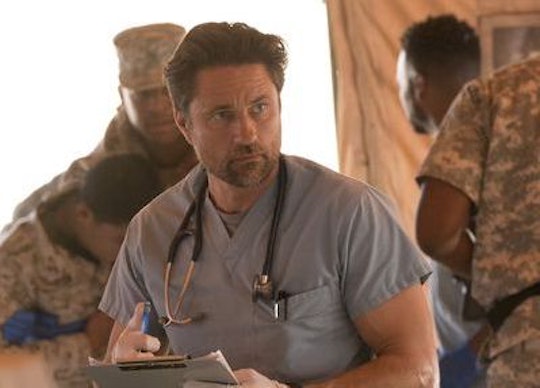 Is This Character Leaving 'Grey's Anatomy'?

In Thursday night's episode of Grey's Anatomy, fans were taken back to 10 years ago, to the day Megan was kidnapped, and also shown the present, in which Megan was preparing for her new life with Riggs and her son, Farouk. By the end, it seemed the three were quite the family, enjoying life in their beach house in L.A., leaving many fans to wonder is Riggs leaving Grey's Anatomy?

During the episode, Riggs and Farouk got to spend quality time together, putting together the house while Megan took her road trip down to California, with an unwanted passenger, Owen. Although Farouk was clearly concerned about this new life he'd be leading in America, by the end of the episode Riggs and Farouk had formed a clear and adorable bond. When Megan arrived, the trio looked to be the perfect family as they played together on the beach, and it was quite possibly one of the most perfect happy endings Grey's Anatomy has ever given their fans.

Well, except for Meredith. Prior to Megan's arrival, Riggs texted Meredith saying, "Thank you," and she replied with the same statement, giving some fans hope this wasn't the end for their relationship. Unfortunately, that little scene was more of final goodbye between the two, as it has now been revealed that Riggs, played by Martin Henderson, has actually exited the show for good.

Grey's creator Shonda Rhimes broke the news on Twitter after the episode aired, confirming that it was in fact the last episode for Henderson.

"I loved that we were able to give Riggs a happy ending worthy of his character and talent," she wrote in a statement on the social media site. "As for Martin, this is not an ending for our relationship. He has been part of the Shondalant family since the pilot of Inside the Box and he will always be family. I can't wait to find a new project to work with him on in the future."

If you're unfamiliar, Inside the Box was one of the first Shondaland productions that never made it to TV. After that, Henderson also starred in another short-lived Shondaland production, Off the Map, which only aired for one season on ABC back in 2011. There's no doubt that Henderson is definitely a part of the Shondaland family and with Rhimes' new Netflix deal and the other number of projects she has in the works, I'm not worried about Henderson one bit. I'm sure we'll see him up on our screens again at some point very soon.

I am worried about Meredith though. When Riggs was introduced in Season 12, the two immediately butted heads, mainly because Owen didn't like him and Meredith, being the good friend that she is, also didn't like Riggs on principal. However, that was short lived when Meredith later hooked up with Riggs and then realized she actually had feelings for him. For the first time since Derek died, it seemed like Meredith could actually find love again. In fact, she had, and Riggs even loved her back. But then his long lost fiancée came strolling back in, and how could Meredith get in the way of that?

The truth is, she didn't want to. In complete contrast to the Addison-Derek-Meredith love triangle of Season 2, when Megan returned, Meredith totally stepped aside and even encouraged Riggs to get back together with her. It was Meredith that helped Riggs reunite Megan and Farouk, and most importantly, it was Meredith who saved Megan's life with an incredible skin transplant. While I loved Meredith for being so selfless and the badass surgeon she's always been, it was still heartbreaking to see her find love and then lose it in a flash.

Still, Meredith is a strong, independent woman, and at the end of the day she has her kids, her sisters, and her friends. For now, maybe that's all she really needs. But I'll still miss Riggs though. I'm glad he found happiness, of course, but Grey's simply won't be the same without him.