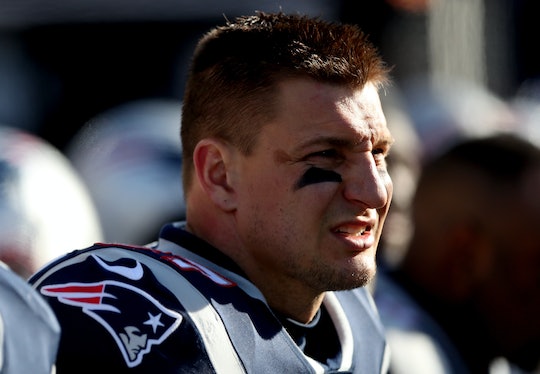 As fascinating as football stats may be, personally, I'm much more interested in learning about the personal lives of the NFL players. While you're busy building your fantasy teams and tracking personal records, some of us are doing a much different kind of background research. For example, is Rob Gronkowski engaged? The Patriots' tight end is in a committed relationship with someone else who has worn a New England jersey.

Gronkowski has been in an on-again-off-again relationship with former Patriots cheerleader Camille Kostek. But, as Kostek explained to Fox News last March, their relationship didn't truly begin until after she stopped cheering for his team. "We first got in touch once I resigned from the team," she told the news outlet. "I always knew who he was before I was even a cheerleader. I knew who he was on the roster. I just never paid any mind. Once I resigned is when we finally met."

Kostek has since been pursuing her modeling career and taking life one day at a time. As for any plans to settle down with Gronkowski, she told The New York Post that she's taking their relationship one day at a time as well. "I don’t know about my near future. I like to think of my life as very spontaneous and new all the time," she told the publication. "So whenever a proposal comes into my life, I think that I’ll be very surprised, but right now, Rob and I are totally career-focused. We’re not just a fling. We definitely see a future with each other. But as of right now, there are no plans."

But if you listen to the rumors circulating about Gronkowski and Kostek, they may be off more than they're on. Being under the lens of media scrutiny can be hard on any relationship. The secret to sticking together through it all? Gronkowski told The New York Post in a separate interview that he doesn't let rumors get to him:

I’ve quickly learned that everyone has their own two cents, and I just kind of let that stuff roll and let the people talk. At the end of the day, the people that matter know what’s the truth ... When I talked to the people that are important to me, I was like, everyone knows the real truth.

Along with not painting the most realistic picture of the couple's relationship, Kosek told the Improper Bostonian that the media doesn't show the public the version of Gronkowski that she knows and loves: "He is a teddy bear at heart. For as crazy and wild as he’s portrayed by the media, and that is him in the videos being Rockin’ Rob, but I know a very soft side of him that he shows every day."

Spontaneity seems to be their thing, and it even extends into Gronkowski's athletic career. When speaking with ESPN on Super Bowl media night Monday, Gronkowski responded to questions on his future football plans. "As of right now, those are the last things I'm thinking of. ... I love playing the game. After a long season, after the [Super Bowl], a few weeks down the road, you sit back, you relax, you get some downtime, enjoyment time. And you just see where you want to go with it," he told ESPN.

Both Gronkowski and Kosek have their hands full chasing their dreams. Whether or not those dreams include marriage, children, and all that is unclear. But what is clear is the love and support that they have for one another. And isn't that what matters most?